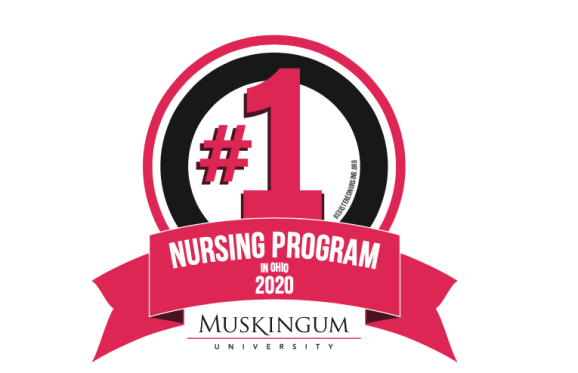 Distinction Awarded by RegisteredNursing.org Out of 96 Qualified Programs Throughout the State of Ohio

Muskingum University today announced the school’s Nursing Program is #1 in the state of Ohio according to nationally-recognized nurse advocacy group RegisteredNursing.org. The elite program was chosen out of a pool of 96 in Ohio, moving up from the #4 slot in 2019.

According to RegisteredNursing.org, nursing programs were assessed on several factors that represent how well a program supports students towards licensure and beyond. The group analyzed past and present first time National Council Licensure Examination (NCLEX) “pass-rates” - weighted by year, among other factors.

Additionally, the University’s Nursing department also received a 10-year accreditation – the most a program can be awarded – by meeting all four standards from the Commission of Collegiate Nursing Education (CCNE) in 2016.

“We set the bar very high for our nursing students to help them develop the skills needed to hit the ground running as professional nurses, and we’re thrilled that our #1 ranking reflects this commitment to long-term graduate success,” said Dr. Cynthia Wilkins, director and chair of Nursing programs at Muskingum University. “The need for quality health care providers is at an all-time high in our region, and we take pride in producing quality graduates equipped to navigate the unpredictable and fast-paced nursing landscape.”

According to the U.S. Bureau of Labor Statistics, employment of registered nurses is projected to grow 12 percent from 2018 to 2028, much faster than the average for all occupations. The study indicates growth will occur due to increased emphasis on preventive care; growing rates of chronic conditions, such as diabetes and obesity; and demand for healthcare services from the baby-boom population, as they live longer and more active lives.
“This amazing ranking, and the continued success of our Nursing programs, is a tribute to Muskingum University’s dedicated faculty members, and our excellent students, who are meeting a clear need for qualified nursing staff while contributing to the positive health and wellness of our region and beyond,” said Muskingum University President Susan S. Hasseler.

“As a member of Nationwide Children’s critical care transport team, I care for an expansive list of illnesses in the pediatric community both on the ground in our mobile unit and in the air in the Monarch 1 helicopter,” Dickey said. “The pressure as a member of this team is often high, but I rely on the education and hands-on experience Muskingum provided me to be successful. Without this foundation, I would not be where I am today.”

Muskingum’s nursing program is comprised of five, full-time faculty members, each of whom continues to practice in the nursing profession.  By remaining active in the field, program instructors understand current practices and methodologies, which is a proven benefit to students.

Muskingum offers three programs – the bachelor’s degree program for traditional prelicensure students and an adult, online R.N. to B.S.N. program for established nurses wishing to earn their bachelor’s degree in nursing. Rounding out its offerings, the University also launched an accelerated nursing program (ABSN), a new track in its Bachelor of Science Nursing platform, that begins in fall 2020.  The ABSN is designed for individuals who hold a bachelor’s degree or higher in a field other than nursing and want to join the growing healthcare industry as a registered nurse.

Work begins on the Health and Wellness Complex Project

Coronavirus Information Center
Back to top