We hope you find what you need within these pages, but if not, please feel free to contact us. 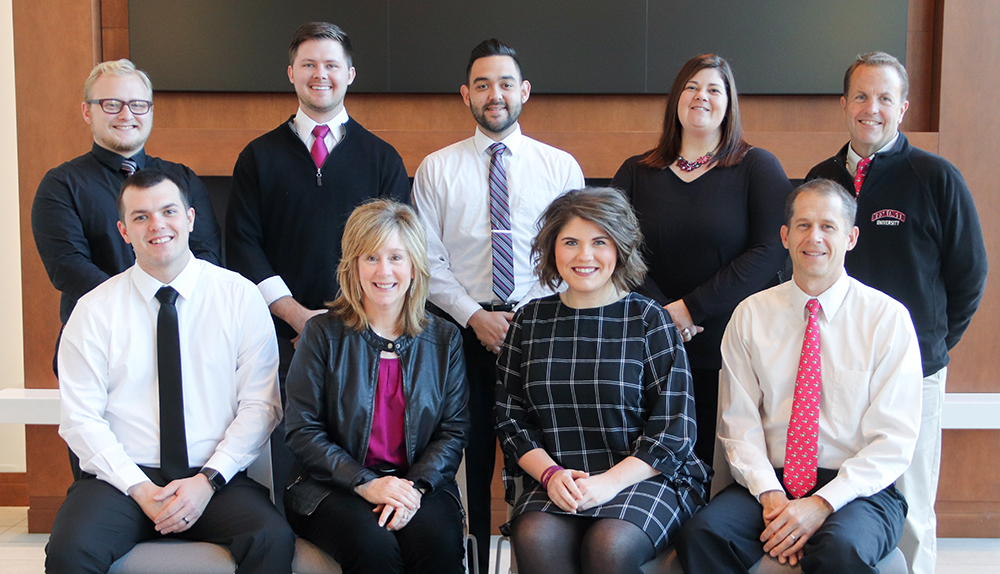 What do you like to do when you aren’t at work?  Although I love my job helping students get admitted to Muskingum University, there’s a ton of other stuff that keeps me busy at home! I have two gardens that take up a lot of my time in the summer. I also have two dogs, chickens and honeybee hives. I am never bored at home – there is always something that needs to be done! I also love to cook and travel.

What’s the most adventurous thing you’ve done?  I love the outdoors, and the most adventurous thing I’ve done is taking up backpacking with my husband several years ago. We’ve seen some amazingly beautiful scenery and I’ve accomplished physical things I’ve never thought possible. We love our country’s National Parks, but there are also many other areas that we’ve visited. Any backcountry trip is open for discussion.

Favorite Activity? Every summer, I try to take a canoe trip in the Boundary Waters of Northern Minnesota. There's not much I'd rather do than paddle through those lakes and rivers, camping out and catching fish for dinner.

Best thing about Muskingum? During my sophomore year here at Muskingum, I met my future wife. We've been married since 2006 and I can't imagine a better life than what we have shared here in this community. Muskingum truly is a special place.

What are your most-prized possessions?  My music collection: vinyl, cassette, CD, and digital – I value it all (though, I surely prefer the seek/find process for the non-digital). My high school years were all about soul and funk; college radio in the early 80's exposed me to punk (and post-punk), new wave, reggae and world music, and electronic and industrial music (among others); and working in an independent record store in a university town from 1990-95 only poured gas on the flames. Twenty years later, they're still burning. Oh, and my mountain bikes: I have two Specialized Stumpjumpers – one set up for road riding, and the other for off-road use, because, as the saying goes, the fun begins where the pavement ends!

What are your "go-to" nature destinations?  If I had an hour, it would be a walk around the New Concord Reservoir with my dog, Woody; a day, the AEP Recreation Lands a half-hour south of town; a week, the Jefferson National Forest and the Blue Ridge and Allegheny Mountains in my beloved homeland of SW Virginia; a month, the Clearwater National Forest in northern Idaho (specifically, the Kelly Forks area, near the Montana border). Great – now I'm daydreaming and worthless for the rest of the afternoon!

Favorite childhood memory?  Lucky for me, I grew up in a small town that allowed me to be surrounded by friends and family my entire life. All my favorite memories include my older sister, Courtney, singing in the car, dancing in the kitchen, playing in the swimming pool, and campouts in the living room.

What is your most prized possession?  My necklace that has my grandma’s finger print on it.

What do you love best about working at Muskingum?  I love that every single day I continue to have connections with students, staff, and faculty at the place that shaped my life. I love getting to see the transformations our students make from prospective to graduate. I’m sure I’m biased, but there is truly no other place like Muskingum.

What is your favorite thing to do in your free time?  There are a couple of things I enjoy doing in my free time. I absolutely love wrestling with my daughters Lilah and Cece. I love playing video games. I’m a pretty good Fortnite player; 1v1 me sometime. I also LOVE watching college basketball. I usually take a week off for vacation during the first round of March Madness each year.

What is your favorite food?  I could eat wings every single day for the rest of my life. Breakfast, lunch, dinner, and dessert. Dry rub. Sauce. Plain. Doesn’t matter. . I definitely am all about flavor and I am the first one to say that I can’t take the heat. If I had to pick one place to eat, it would be Roosters.

What is your favorite part about working at Muskingum University?  I love how welcoming everyone is at Muskingum. From the first time I stepped onto campus, the people made me feel as though I were a part of the Muskingum family. I also love that I get to impact the lives of students, and meet people from all across the nation.

What is your favorite family tradition?  During the last week of July my mother’s side of the family holds a week long family reunion at Tappan Lake. This tradition has been going on for about 30 years now and the week is filled with playing cards, riding bikes, hiking trails, cooking s’mores over the fire, hosting a fish fry, and of course camping with cousins.

What are your favorite shows to binge watch?  I find it very difficult to pay attention to anything else when The Office or Seinfeld is on TV. Most recently, though, I have become a big fan of The Walking Dead, House of Cards, Riverdale, and Game of Thrones.

What’s one thing most people don’t know about you?  I’ve been to 10 different countries including Italy, England, Ecuador, India, Germany and France. Despite that, and despite having lived in three different states adjacent to it, I’ve never been to Canada.

What was your favorite memory from your time at Muskingum? One of my favorite memories of Muskingum didn’t actually take place on campus. I was touring in Germany with the MU Concert Choir and we got to perform in St. Thomas Kirche, the church where Johann Sebastian Bach is buried. It was an incredibly moving experience, and I got to have that experience with so many people I love from Muskingum. I think it goes to show how Muskingum isn’t just a place, it’s also an experience you share with people you care about.

Who inspires you? My mom, without question. She sacrificed a lot and worked tremendously hard to put 3 kids through college and helped my brothers and I get to where we are now.

What is your favorite Muskingum memory? My senior year, Dr. Hattingh and Dr. Dunak took a few History majors on a behind-the-scenes tour of the Pro Football Hall of Fame. My favorite part of the entire trip was getting to talk to Dr. Hattingh on the drive up to Canton about everything, from how transfers in soccer worked to talking about his time traveling the world, especially in South America. It was just an all around awesome experience.

How has Muskingum impacted your life? I met my future wife my junior year at Muskingum. 7 of the 10 people in our wedding party were Muskingum grads. Jenn and I got our dog while we were both students at Muskingum. My brother, Jon, transferred to and graduated from Muskingum. A large majority of the important people in my life are there because I went to Muskingum University.

Schedule a Visit
Admission
Back to top