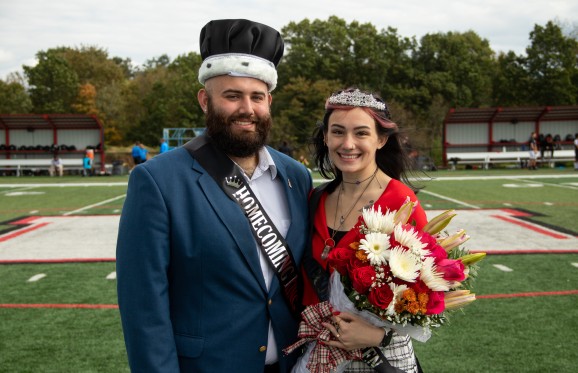 Caleb McManaway is a health and fitness major with a minor in nutrition from Columbus, Ohio. He is Greek Council President, the member of Kappa Sigma, and a Resident Assistant. Sydni Trudo is a neuroscience major with minors in pre-law and political science from St. Clairsville, Ohio. Sydni is the Student Senate President, a member of Theta Phi Alpha, a Chess Center Supervisor, a Kappa Sig Sweetheart Representative, a member of BSU, Outdoor Initiative Club, Neuroscience Club, Psych Club, and Women in Progressive Politics Club.

In 2019, the University held a virtual homecoming because of the COVID-19 pandemic, and the crowning of the 2020 King and Queen was held Spring semester.

Muskingum University celebrated its 2021 Magenta Homecoming in person with a variety of activities throughout the weekend that were outdoors or socially distanced indoors allowing alumni and students to participate in this annual celebration. Highlights included an alumni awards dinner and collage concert; University update from President Susan Hasseler; viewings of the Bullock Health and Wellness Complex; softball, soccer and football games; and several mixers and social activities for alumni and students.