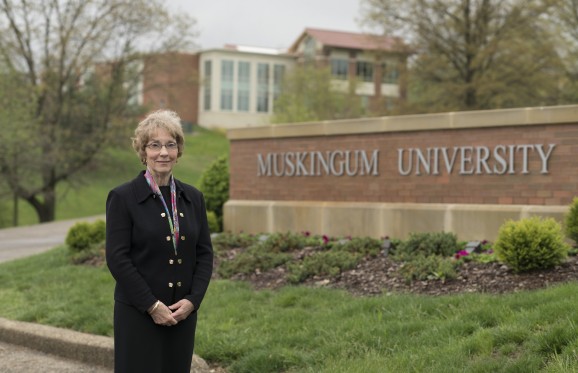 Muskingum University President Anne C. Steele announced on Saturday, April 18, 2015, that she will retire on June 30, 2016.  She has served since January 1, 2000, when she became Muskingum’s 20th president and first female president.

"We accepted President Steele’s announcement with great regret and deep appreciation for her exceptional leadership and visions,” said Hal Burlingame, Chair of the Muskingum University Board of Trustees.  “She has led us in an unprecedented period of growth and development.”

Under her leadership, six new buildings have been constructed – a library, student center, music building, communication program building, art center and art gallery – and extensive renovations of Muskingum’s existing facilities and campus infrastructure have been completed.  “Each new building was completely paid for by gifts from Muskingum alumni and friends, which is virtually unheard of in higher education today,” commented Chairman Burlingame.

President Steele has led the expansion of Muskingum’s academic offerings, including the creation of three new degree programs, 15 new majors, the Muskingum Adult Program, and wide-ranging continuing education and professional development programs to meet the needs of Ohio’s workforce.  Student experiential learning and co-curricular opportunities have also increased and nine endowed chairs – the first in Muskingum’s history – were established to support excellent teaching in perpetuity.  In 2010, President Steele oversaw the institution’s transformation from Muskingum College to Muskingum University.

In announcing her retirement, President Steele said, “It is truly an honor to be a part of a community of such dedicated faculty, staff, students alumni, and friends.  Because of you, untold lives have been changed and promising futures are allowed to unfold.  I will always cherish my time at Muskingum and in New Concord.”

Chairman Burlingame also announced that a national search process will soon be launched to identify candidates to succeed President Steele.

To read letters to the Muskingum community from Chairman Burlingame and President Steele, click here.

2022 Summer Camps: Athletics, Musical Theatre, and STEAM
Back to top