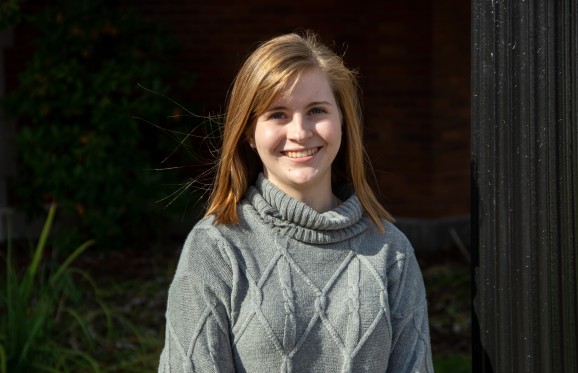 The highly competitive, merit-based scholarship is awarded to Ohio college undergraduates who demonstrate outstanding knowledge and commitment to careers in environmental science or environmental engineering.  For 2022, nine students were selected to receive scholarships, which are funded through the Ohio EPA’s Environmental Education Fund.

Taylor is majoring in Conservation Science and Spanish, and minoring in English.  She serves as the President of the biology honorary society, Beta Beta Beta, and of the campus Bird Club.

“My classes and hands-on experiences at Muskingum have been amazing opportunities, which enabled me to receive this scholarship,” Taylor said.

During the summer following her sophomore year, Taylor participated in the Muskie Research Fellows program for students working in collaboration with faculty members on hands-on research projects.

Taylor partnered with Dr. Jim Dooley, Bill and Martha Lovejoy Professor of Biology, and Dr. Danny Ingold, Homer A. Anderson Distinguished Professor of Natural Science, in the ongoing Study of Populations of North American Grassland Birds, now in its tenth year. During most summers for the past 20 years, student/faculty teams have gathered grassland bird data at The Wilds, the largest conservation facility in North America.

“I learned about the grassland birds project when I first enrolled at Muskingum,” Taylor said. “I came to campus for Muskie Preview the summer before my first year and met Dr. Dooley. He invited me to visit that year’s grassland birds team at The Wilds. I spent a day with them and knew immediately that I wanted to major in Conservation Science and to be part of that project during my time at Muskingum.”

This summer, Taylor worked as a naturalist intern at Salt Fork State Park. Her future plans include graduate school and a career in the conservation field.