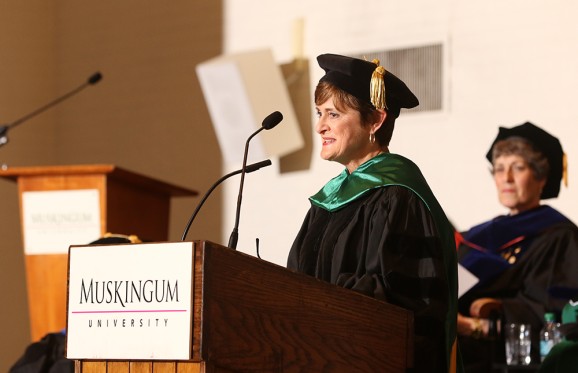 Dr. Kim Gage Rothermel ’71, new Chair of the Muskingum University Board of Trustees, will address incoming students and their families during the University’s 2019-2020 Opening Convocation Ceremony on August 23.

Opening Convocation will also feature the passing of the University’s historic “Key of Knowledge” to the new Class of 2023, along with remarks by the Honorable Brett Essex, Mayor of the Village of New Concord, and William Crawford ’20, President of the Muskingum University Student Senate.

Dr. Rothermel became Chair of the University’s Board of Trustees on July 1, 2019, succeeding Hal Burlingame ’62, who served in the role for 25 years and who will continue to serve Muskingum as a Board of Trustees member.

A retired pediatrician, Dr. Rothermel joined the Board of Trustees in 1997 and has served on the Executive Committee and as the Chair of the Academic Affairs Committee.  In her medical career, she served in private practice at the Ohio Center for Pediatrics, as a Clinical Assistant Professor at the Ohio State University, and as President of the Medical Staff at Nationwide Children’s Hospital.  She earned her medical degree from Rush University College of Medicine in Chicago and trained in Pediatrics and Pediatric Hematology/Oncology at Nationwide Children’s Hospital, achieving board certification in both specialties.