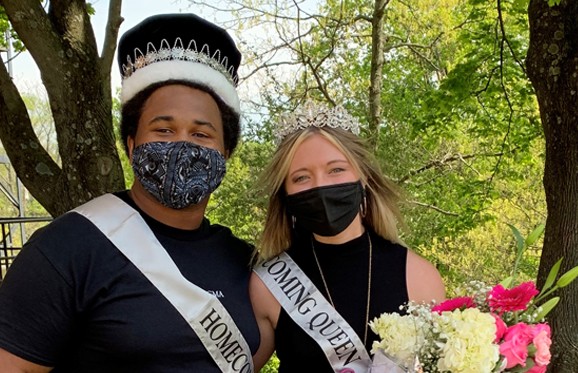 The ceremony was held during the last week of classes and as part of Spring Fest, giving students an opportunity to join the celebration.

The 2020-2021 homecoming queen is Mariah Ridgeway. She is a neuroscience major from Jackson, Ohio. She is member of Theta Phi Alpha, Order of Omega, ODK, Outdoor Initiatives Club, and Neuroscience Club and works as a Muskie Preview Leader, softball student assistant, along with 3 other campus jobs. The homecoming king is Corey Lancaster. He is an accounting major from Cincinnati, OH. He is the Vice President of Kappa Sigma, a member of the football team, and a supervisor in the Chess Center.

The homecoming queen and king are selected from 10 candidates, which included:

In October, the university hosted a series of activities for alumni and students to honor homecoming; however, the time-honored tradition of recognizing the homecoming court and crowning of the queen and king was postponed.

“We were thankful to host Reunion Weekend @Homecoming 2020 giving our alumni and students an opportunity to come together in the fall,” said Michael Malone, associate vice president of Student Affairs at Muskingum University. “However, we could not end this unprecedented year without recognizing our homecoming court and crowning our queen and king.”

Nursing Program Receives State and National #1 Rankings
Back to top