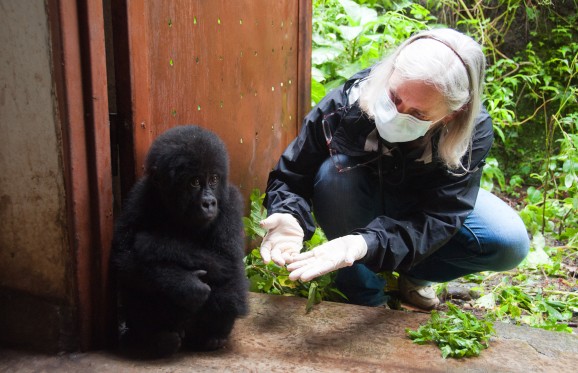 Researcher Dr. Jan Ramer gave the third annual lecture in The John Glenn Distinguished Lecture Series in Earth and Planetary Sciences at 4:30 p.m. on March 20 in Boyd Science Center Room 343. Dr. Ramer’s presentation, “Conservation Medicine Through the Eyes of a Gorilla Doctor,” provided details of her experiences working in the Madagascar, Rwanda, Uganda and the Democratic Republic of Congo.

Dr. Ramer is currently Vice President at The Wilds, a conservation safari park in southeastern Ohio, where she previously served as Director of Conservation Medicine.

She has served as President of the American Association of Zoological Veterinarians, a member of the International Iguana Foundation board of directors and as Regional Manager for Gorilla Doctors, an organization dedicated to saving the mountain and eastern lowland gorilla species. As Regional Manager, she led a team of African veterinarians in Rwanda, Uganda and the Democratic Republic of Congo for more than three years.

Dr. Ramer began her career as an animal keeper at the Indianapolis Zoo in Indiana and Brookfield Zoo in Chicago, Illinois. She received her Bachelor’s Degree in biology from Purdue University and her Doctorate of Veterinary Medicine degree from the University of Wisconsin.

The John Glenn Distinguished Lecture Series in Earth and Planetary Sciences was established and endowed by alumnus Bill Lovejoy ‘51 and his late wife Martha Johnson Lovejoy ‘52 to honor the memory of John Glenn ‘43, one of Muskingum University’s most accomplished and inspiring alumni. The lectureship, founded in 2017, features an annual speaker, chosen by a committee of faculty members from the Muskingum University departments of biology, geology and physics. The inaugural lecture was given by Dr. Scott E. Parazynski, a veteran of five Space Shuttle missions, physician, explorer and entrepreneur, who flew on mission STS-95 with Glenn in 1998 as his personal physician.

Watch the video recap below.

Celebrate the Holidays at Muskingum
Back to top