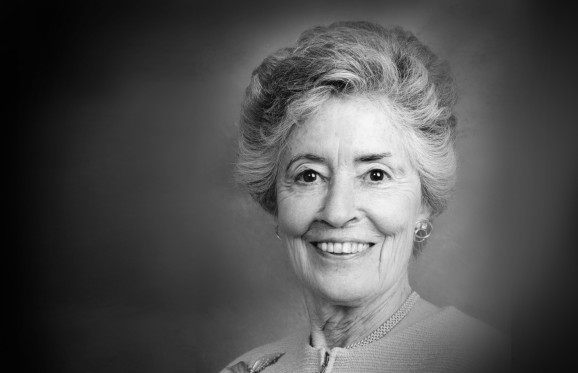 With our deepest respect and greatest admiration, Muskingum University remembers Anna Castor Glenn today. The world knew Annie Glenn as the childhood sweetheart and wife for more than seven decades of pioneering astronaut and four-term Senator John H. Glenn, Jr., and as an inspirational public advocate for people with communicative disorders.

Our Muskingum University community was extraordinarily privileged and proud to know her as a loyal alumna, a trustee, and a distinguished alumni professor. A member of the Class of 1942 and a Trustee Emerita since 2006, she served as a University Trustee beginning in 1981 and as a Distinguished Alumni Professor in Public Affairs beginning in 1998. She received an honorary Muskingum Doctor of Humane Letters degree in 1995 and a Muskingum Alumni Association Distinguished Service Award in 1981.

Annie Glenn earned her Muskingum Bachelor of Arts degree in Music and Education, and was an accomplished organist. Immediately following her senior music recital in Brown Chapel, on Pearl Harbor Day, December 7, 1941, her sweetheart John announced to her that he would be going to war as a fighter pilot. She chose to forego a scholarship offer for graduate studies at the Julliard School of Music, and the couple married in 1943. They became the parents of John David Glenn in 1945 and Carolyn Ann (Lyn) Glenn in 1947.

Despite a severe stutter which hampered her ability to converse with others, Annie Glenn persevered throughout her education; their frequent multiple moves during John’s service as a Marine combat aviator and test pilot; and their life in the public eye as he became a pioneering astronaut and business leader.

In 1973, at age 53, a Hollins Communications Research Institute program successfully treated the physical disorders behind her stuttering and enabled her to speak clearly and confidently. She began giving public speeches to help and inspire others, including her 1995 Muskingum Commencement address which received a standing ovation and national press coverage by Newsweek.

She received the first national award of the American Speech and Hearing Association, and the National Association for Hearing and Speech Action created the prestigious “Annie Glenn Award” in her honor. Her lifelong commitment to serving others led to her dedicated efforts to improve the lives of people with disabilities, of the elderly, and of children.

The entire Muskingum University community extends our deepest sympathy to the Glenn family. Our thoughts and prayers are with you.