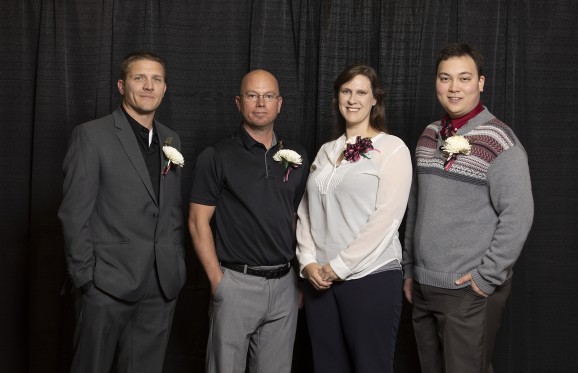 Muskingum University honored four distinguished alumni with Emerging Alumni Awards during its first Reunion Weekend at Homecoming earlier this month. Sponsored by the Muskingum University Alumni Council, the Emerging Alumni Award (EAA), established this year, recognizes and honors alumni who in the first 15 years of their careers have made significant contributions to their profession and their world.

Luke Ford ’03 and Rob McBurney ’05 were each granted the Personal Initiative award; Rachael Hrisak Gorsuch ’06 was granted the Social Responsibility award; and William Sherry ’13 was granted the Vocational Achievement award.

Luke Ford ’03 and Rob McBurney ’05 established The Quincy Conner Foundation in New Concord, Ohio, in honor of Quincy Conner ’00, who died suddenly at the age of 28 from a massive heart attack. The non-profit organization raises funds for college scholarships to inspire and support young people. Nearly $40,000 has been distributed to date through: The Q Scholarship, for graduates of Quincy’s high school alma mater, Woodbridge Senior High School in Woodbridge, Virginia; The Memorial Scholarship, for Ohio students enrolling at Muskingum; and The Legacy Scholarship, for students who have lost a parent due to heart disease.

Muskingum alumni from across the country have contributed to the Foundation, which continues to support student scholarships and annually sponsors Phi Kappa Tau golf outings throughout Ohio and the “5Q” 5K race and fun run in Woodbridge, Virginia.

An upper school mathematics teacher at Columbus Academy, Rachael Hrisak Gorsuch ’06 is a frequent conference presenter on teaching mathematical modeling. She was the only North American high school teacher selected for the 2018 International Community of Teachers of Mathematical Modeling and Applications conference in South Africa. She and her family are committed to multiple community service projects and since 2015 have hosted exchange students from predominantly Muslim countries, working to promote intercultural and interreligious understanding.

Building on the foundation of his Muskingum B.S.N. degree, William Sherry ’13 earned Master of Science in Nursing and Doctor of Nursing Practice degrees. He serves as a hospitalist for Team Health, managing patient care from admission to discharge for Genesis Hospital. As a researcher, his aim is to improve clinical practice and patient quality of life. He has been recognized with the Excellence in Clinical Practice Award and the D.A.I.S.Y. Award. He frequently volunteers with the Muskingum University nursing program.