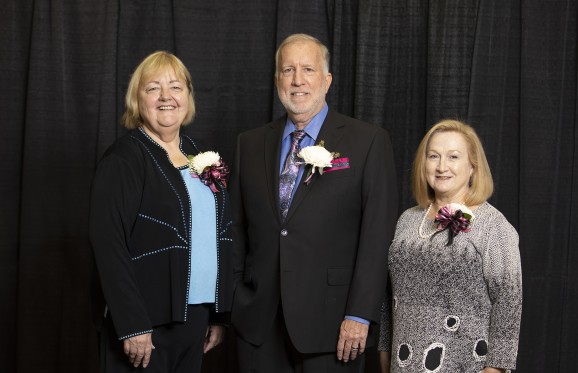 Sponsored by the Muskingum University Alumni Council, the DSA recognizes and honors alumni who have distinguished themselves through their professional endeavors and exemplary services to society. Any living Muskingum graduate or former student is eligible to receive this award. Awards were granted to Craig Anderson ’73, John Bollinger ’68, Bev Coen ’68 and Ruth Wasem ’76.

A Muskingum University Board of Trustees member, Craig Anderson ’73 is a neonatologist and the Founder and President of Central Ohio Newborn Medicine, Inc. He practices at OhioHealth Grant Medical Center, Mount Carmel Medical Center, and Nationwide Children’s Hospital and is on the faculty of The Ohio State University College of Medicine. He has received multiple professional honors and has served as the president of regional and statewide medical associations.

John Bollinger ’68 was commissioned in the U.S. Navy in 1969 and served until a cervical spine injury ended his military career. For 35 years, he assisted veterans and their families, first with the U.S. Department of Veterans Affairs and then with the Paralyzed Veterans of America, from which he retired as deputy executive director. He has served on the boards of the President’s Committee on Employment of People with Disabilities, Christopher Reeve Foundation, Spinal Cord Research Foundation and Alexandria Commission on Persons with Disabilities.

Bev Coen ’68 served as Chief Tax and Risk Officer of Nordson Corporation, where she oversaw global tax and risk management functions and was a trustee of the Nordson Corporation Foundation. She co-founded the Greater Cleveland Interfaith Hospitality Network (now Family Promise of Greater Cleveland) and has held volunteer leadership roles for multiple service organizations. She is a Muskingum University trustee and was named a Volunteer of the Year by the Ohio Foundation of Independent Colleges.

Ruth Wasem ’76 is currently Professor of Policy Practice in the Lyndon Baines Johnson School of Public Affairs at the University of Texas at Austin. For more than 25 years, she served as a domestic policy specialist on immigration at the U.S. Library of Congress Congressional Research Service. Ruth has received fellowships and honors from the U.S. Library of Congress and the John F. Kennedy Presidential Library, has authored numerous publications and is a contributor for TheHill.com, NPR’s All Things Considered, and other media outlets.