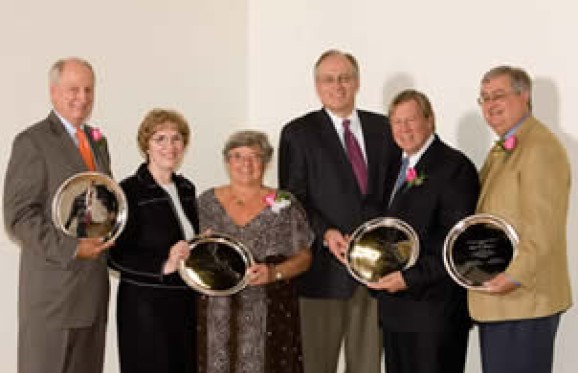 A highlight of this year’s Muskingum College Alumni Weekend, held June 20-22 on the campus, was the presentation on June 20 of the Distinguished Service Award (DSA) to four alumni in recognition of their personal and professional achievements. The award is the college’s highest alumni honor.

Sponsored by the Muskingum College Alumni Council, the DSA recognizes and honors alumni who have distinguished themselves through their professional endeavors and exemplary services to society. Any living Muskingum graduate or former student is eligible to receive this award.

Receiving the award were Elizabeth Topping Mainiero ’57, a leader and innovator in the field of library science; Reverend Dr. W. Terry Schoener ’60, whose career as a pastor who impacted the nation’s civil rights movement; Robert Jennings Reveley ’65, an entrepreneur and civic leader; and Walter R. Young, Jr. ’66, a widely recognized leader and innovator in the manufactured housing industry.

Throughout her 40-year career in library leadership, Elizabeth Topping Mainiero has played a pioneering role in shaping the library for the information age, fundamentally enhancing the way these vital resources serve citizens of all ages.

Her groundbreaking initiatives spanned the full range of library services and administration. Mrs. Mainiero launched an integrated library system in 1978 – the second of its kind in the nation and the first east of the Mississippi River – and convinced libraries across New England to invest in shared emerging computer technologies. This transformed local resources into regional ones, led to many “firsts” in federal library grant funding, and paved the way for today’s internet-based consortia.

She was one of the first to recognize the library’s emerging role in providing opportunities for conversation and social interaction. She engaged nationally-known architect Cesar Pelli in 1994 for the Greenwich, Connecticut Library’s addition and renovation, which included informal gathering and work spaces for library patrons – the precursor to today’s “internet cafes.”

An English major at Muskingum, Mrs. Mainiero earned her master of library science from Carnegie Mellon University. Currently, she consults with libraries throughout New England on building programs and long-range plans. She shares her talents with educational organizations, serving on the Board of Governors of Saint Timothy’s School in Maryland and as a trustee of Saint Gabriel’s School in Connecticut, and the Whitby School in Connecticut.
She and her husband, Vincent, reside in Milford, Connecticut, and have four children – Morrow, Lisa, Bonnie and Kimmo – and 10 grandchildren. Her daughter, Bonnie Long Gorman ’88; her mother, Clara Bentley Topping ’27; and her aunt, Kathryn Bentley Schaefer ’27; are also Muskingum College alumni.

The Reverend Doctor W. Terry Schoener has had a profound impact upon others. With a passionate dedication to civil rights and social justice, he has extended his singular ministry far beyond the physical boundaries of the congregations he guided during his 44-year pastoral career.

Rev. Dr. Schoener’s initial call was to the First Presbyterian Church in Seville, Ohio, from 1963-1966. He led the church to open its doors as a way-station for the “poor people’s marchers” who walked for civil rights from inner city Cleveland to Columbus. In Mississippi, in 1964, he worked in the watershed voter registration drive, facing antagonism from the Ku Klux Klan and local law enforcement agencies alike.

In 1966, Dr. Schoener was called to the Glenville United Presbyterian Church in inner city Cleveland. When rioting began, he served as a mediator and hosted Dr. Martin Luther King, Jr., who gave his famous Glenville speeches from Dr. Schoener’s pulpit. Working alongside Dr. King and other national civil rights leaders, Dr. Schoener fought for minority economic empowerment that led to the first two McDonald’s franchises ever awarded to African Americans, and other significant economic opportunities.

While serving The First Presbyterian Church in Warren, Ohio, in 1971, Rev. Dr. Schoener led the city’s integration efforts, co-chairing the Committee to Desegregate Warren Public Schools and a task force to improve the city’s judicial and law enforcement systems.

Rev. Dr. Schoener led Woods Memorial Presbyterian Church near Annapolis, Maryland for more than 27 years, and it became a hub for Anne Arundel County citizens of all faiths – building housing facilities for the low-income elderly, and purchasing and renovating a failing YMCA, providing a much-needed, ongoing community resource. He established a sister relationship with a church in Kingston, Jamaica, creating educational and health care programs for local citizens.

Rev. Dr. Schoener earned his master of divinity and doctor of divinity at Pittsburgh Theological Seminary. He and his wife, Brenda Hall Schoener ’61, reside in Severna Park, Maryland. Their three children are all members of the Long Magenta Line – Halle S. Randles ’86, Mathew H. Schoener ’88, and Bradley C. Schoener ’89.

Robert Jennings Reveley has created a distinguished and wide-ranging legacy in entrepreneurship, the arts, and civic leadership.

Following his graduation from Muskingum with bachelor of science in mathematics, Mr. Reveley joined the Peace Corps. In Kingston, Jamaica, he became a member of the first Peace Corps class ever to serve in impoverished urban environments. Returning to the United States, he earned his master of business administration degree from Columbia University and began his business career with RCA International. He later joined Deloitte & Touche as a management consultant.

In 1977, Mr. Reveley founded an independent New York City real estate firm to develop brownstone condominiums. He also developed the $250 million John Jay College of Criminal Justice for the City of New York, and pioneered innovative methods of capital structuring within the commercial real estate industry. His strategies enabled non-profit organizations to create new facilities that would not otherwise have been possible.

Mr. Reveley and his wife, Julie Heberlein Reveley, produced an off-Broadway play, Lily Dale, by Pulitzer Prize and Academy Award-winning playwright Horton Foote, and it was named one of the top ten shows of 1986 by New York Times theatre critic Clive Barnes.

Mr. Reveley’s real estate companies currently operate in seven states. He and Julie live in Palm Beach, Florida, where he serves as Chair of the Board of Trustees for the American Cancer Society of Palm Beach and as a trustee of Cardinal Newman High School.

Walter R. Young, Jr. is dedicated to serving others through his extraordinary business leadership and commitment to private higher education. He was named one of the world’s 1000 most influential business leaders of the past 100 years by the Harvard University Press publication In Their Time: The Greatest Business Leaders of the Twentieth Century.

After leading successful turn-arounds for twenty-three domestic and international manufacturing companies, he retired as the CEO and Chairman of Champion Enterprises, Inc. He took the helm of the company when it was on the brink of bankruptcy and repositioned Champion as the world’s largest homebuilder and a member of the Fortune 500, partnering with the U.S. Departments of Energy and Housing and Urban Development to improve quality, maintain affordability, and enhance energy efficiency of manufactured housing. He is nationally recognized for his expertise in corporate governance, corporate citizenship, and housing policy.

Mr. Young has been a member of the Muskingum University Board of Trustees since 2003, and was elected in 2008 to the Ohio Foundation for Independent Colleges Hall of Excellence. He founded The Young Foundation to support religious, educational, and community endeavors.

A member of the Class of 1966, he graduated with a Bachelor of Arts degree in Economics and History, and holds a Muskingum Doctor of Public Service degree. He earned a Master of Business Administration degree from Pennsylvania State University.

He and his wife Donna Higinbotham Young, also a member of the Class of 1966, reside in Bloomfield Hills, Michigan. They are the parents of two children, Mark and Michelle. More than twenty members of Mr. Young’s family are represented in the Long Magenta Line, including his parents, Mary Borton Young, Class of 1929 and Walter Russell Young, Class of 1930, and each of his mother’s three siblings.