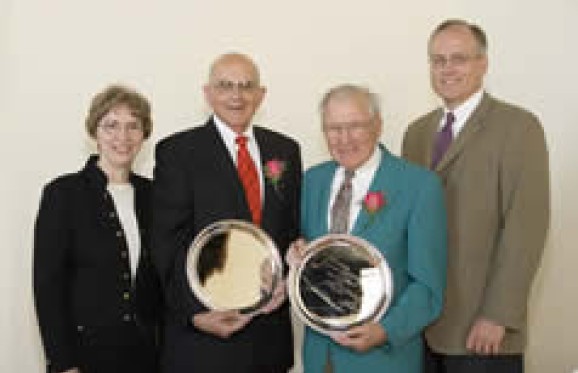 A highlight of this year's Muskingum College Alumni Weekend, held June 15-17 on the campus, was the presentation on June 15 of the Distinguished Service Award (DSA) to three alumni in recognition of their personal and professional achievements. The award is the college's highest alumni honor.

Sponsored by the Muskingum College Alumni Council, the DSA recognizes and honors alumni who have distinguished themselves through their professional endeavors and exemplary service to mankind. Any living Muskingum graduate or former student is eligible to receive this award.

Receiving the awards were: Ralph W. Van Sant, Jr. ’35, who was chief corporate executive for research and technological development for Gulf Oil’s operations in Europe, Africa and the Middle East; Dr. Paul L. Morris ’48, former development director and vice president of the Interlochen Arts Academy, the visual and performing arts boarding high school of Michigan’s renowned Interlochen Center for the Arts; and Dr. Donald H. Williams ’6o, an expert researcher in nuclear and atomic energy who for 33 years has served as a professor of chemistry at Hope College in Holland, Michigan.

As the chief corporate executive responsible for research and technological development for Gulf Oil’s operations in Europe, Africa and the Middle East, Ralph W. Van Sant, Jr. improved the lives of millions of people across the globe. Under his leadership, the Gulf Research Laboratoria N.V. became an integral part of its Dutch community and provided extensive employment opportunities for local workers.

In recognition of his contributions to the Netherlands, he was knighted and received the Order of the Oranje-Nassau from Netherlands Queen Juliana in 1976. The knighthood honored his public service of exceptional merit, dedication and vision; contributions to a multi-cultural society, and employment creation.

Ralph Van Sant began his long career with Gulf Oil in 1938, serving for four decades interrupted only by his tour of duty in the U.S. Navy in World War II. During his early career, he served as director of the technical division of Gulf Research and Development Company in Harmarville, PA.

While at Muskingum, Ralph Van Sant took every math and science class that was offered, triple-majoring in chemistry, mathematics and physics, in preparation for a career in engineering. He then earned his master of science degree from the Massachusetts Institute of Technology, with a focus in business and engineering management.
He resides today in Sequim, Washington. He is the father of two daughters, Gayle and Susan.

Through his outstanding dedication to the advancement of education, Dr. Paul L. Morris’ service to others has helped ensure that current and future generations of performers, visual artists and their audiences will experience the power of the arts to transform lives.

Dr. Morris served as development director and vice president of the Interlochen Arts Academy, the visual and performing arts boarding high school of Michigan’s renowned Interlochen Center for the Arts. The Academy was only one of five schools nationwide to be named a Distinguished School in the Arts by the National Foundation for Advancement in the Arts. Interlochen alumni are prominent in the fields of music, theatre, dance, visual arts, creative writing and motion picture arts.

Dr. Morris has been honored for his contributions by the United States Steel Foundation Mobius Strip Award, presented by the Council for Advancement and Support of Education.

After graduation from Muskingum, he earned his master’s and doctoral degrees from The Ohio State University, beginning his career as a teacher and administrator in Ohio public schools. He later served the Muskingum College community as the vice president of resources and public relations, before joining Interlochen.

Dr. Donald H. Williams, a renowned educator and scientist, has served his students, his community and his country with distinction. A professor of chemistry at Hope College in Holland, Michigan, Dr. Williams encouraged and inspired students for 33 years. An expert researcher in nuclear and atomic energy, he has published extensively and holds a U.S. patent for combined energy systems.

He has frequently toured the country, speaking on nuclear energy issues, and was honored with the American Nuclear Society’s Public Communication and Education Award. On the 50th anniversary of the first nuclear bomb explosion, he led the Smithsonian Institution tour to that historic site.

Dr. Williams has shared his expertise with many local and national government agencies, serving the U.S. Department of Energy as a member of its Education Strategies Planning Committee on Nuclear Issues, as a consultant for its Office of Civilian Radioactive Waste Management and chairing the Board of Governors of the Michigan Low-Level Radioactive Waste Authority.

In his home community, Dr. Williams founded the Holland Environmental Action Council and has worked to help make science careers more accessible for minority high school students. Dr. Williams earned his Ph.D. from The Ohio State University. He is married to Susan Bell Williams ’59, who retired as the director of Hope College’s FOCUS and SOAR academic programs. They are the parents of two sons, Brian and David.