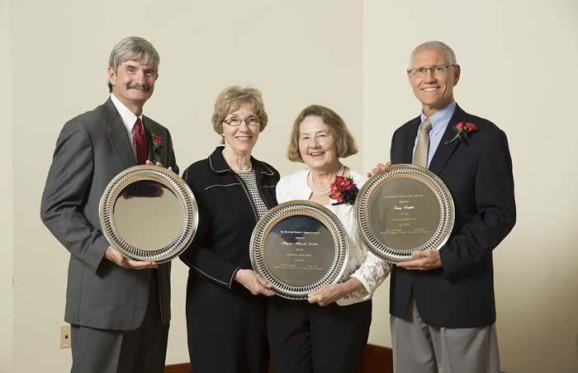 A highlight of Muskingum University’s 2016 Alumni Weekend, held June 17 - 19 on the campus, was the presentation on June 17 of the Distinguished Service Award (DSA) to three alumni in recognition of their personal and professional achievements. The award is the university’s highest alumni honor.

He is the Chief Executive Officer and Co-Owner of TDPI Ventures, an entrepreneurial consulting and venture capital company. Mr. Adams and Lawrence Triplett (Class of 1980) co-founded and for three decades served as co-owners of Resource Systems. The privately-held company provided innovative solutions to track care delivery in long-term and assisted living facilities nationwide, helping to maintain and improve the quality of life for residents. Resource Systems was recognized as one of the fastest-growing companies in America by Inc. Magazine, and was acquired by a public company in 2011.

From 1988-2015, Mr. Adams served as Mayor of the Village of New Concord. He has also served on the New Concord Planning Commission and as a member of the New Concord Village Council. As Chief Infrastructure Officer and Board Member of the Ohio Appalachian Business Council and its subsidiary, the Appalachian Partnership for Economic Growth, he has helped advance economic development throughout Southeastern Ohio.

Mr. Adams earned his Bachelor of Arts degree in Mathematics. He is a licensed private aircraft pilot and a certified scuba diver, and enjoys hiking, the outdoors, skiing, biking, golf, tennis, sailing, and participating in community theater productions. He and his wife Eileen McComb Adams, Class of 1980, reside in New Concord and are the parents of Chelsea and Clare.

Lady Marjorie Hlavacek Crockett has changed the lives of others through her international volunteer service, serving as a community leader across Europe and America, as she and her family resided in cities including London, England; Basel, Switzerland; New York, New York; Washington, D.C.; and San Francisco, California.

Married in 1966, she and Sir Andrew Duncan Crockett became the parents of Alexander George Crockett, Keith Russell Crockett, and Inja Margaret Crockett. While raising their family, Lady Marjorie taught French in Trumbull, Connecticut and London, England. During their residency in Basel, Switzerland, she established Centrepoint, an English language library and community center which serves as a bridge between English-speaking expatriates and local residents and facilitates cultural interaction through conversation groups, events, activities, and newsletters.

Sir Andrew Duncan Crockett, 1943-2012, was an internationally-recognized economist, banker, policy-maker, and diplomat knighted by Queen Elizabeth II for his achievements. From 1994-2003, he was General Manager of the Bank for International Settlements (BIS), the financial organization which serves the central banks of 60 countries around the globe. He was previously an Executive Director of the Bank of England, and served the International Monetary Fund (IMF) as Deputy Director of the Middle Eastern Department and as Deputy Director of Research, where he established the IMF’s World Economic Outlook as the leading periodical of global economic forecasting. Following his retirement from the BIS, he became special advisor to the Chairman and member of the Executive Committee of JPMorgan Chase Bank.

He is the Chairman of the Board and Executive Director of the Muskingum County Business Incubator (MCBI), which he helped create in 2004 in partnership with fellow business owners, higher education institutions, and state and local government entities. He co-founded the East Central Ohio Tech Angel Fund and he generously shares his time and expertise with local colleges and universities to help establish a culture of entrepreneurship in the region.

Mr. Triplett and R. Gregory Adams (Class of 1981) co-founded and for three decades served as co-owners of Resource Systems. The privately-held company provided innovative solutions to track care delivery in long-term and assisted living facilities nationwide, helping to maintain and improve the quality of life for residents. Resource Systems was recognized as one of the fastest-growing companies in America by Inc. Magazine, and was acquired by a public company in 2011.

An active civic leader, Mr. Triplett is also Chairman of the Board of Bethesda Hospital, Chairman of the Board of the Zanesville – Muskingum Chamber of Commerce, and a member of the Board of Directors of Genesis Healthcare and of the United Way. He was previously a trustee of Union Township; an Ohio University adjunct professor; a Big Brothers, Big Sisters of Zanesville volunteer; and a member of the Southeastern Ohio Symphony Board of Directors. He has received many honors and awards in recognition of his exemplary commitment to his community and to entrepreneurial and business development.

Mr. Triplett earned his Bachelor of Arts degree in Business and Speech Communication. He enjoys running, biking, tennis, building things, and helping entrepreneurs invent products and bring them to market. He and his wife Debbie Triplett reside in Zanesville.