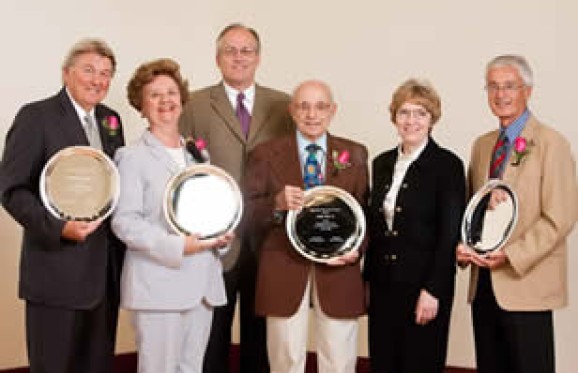 A highlight of this year’s Alumni Weekend, held June 19 - 21 on the campus, was the presentation on June 19 of the Distinguished Service Award (DSA) to four alumni in recognition of their personal and professional achievements. The award is Muskingum's highest alumni honor.

Sponsored by the Alumni Council, the DSA recognizes and honors alumni who have distinguished themselves through their professional endeavors and exemplary services to society. Any living Muskingum graduate or former student is eligible to receive this award.

Receiving the awards were Reverend Frank E. Hare ’52, who has dedicated his life to the ministry; Ruth Ann Moore Duff ’59, a noted philanthropist; C. Barry Montgomery ’59, a nationally recognized litigator; and Demetrios Lignos ’64, known internationally as “the father of digital tape.”

As a trustee of the P.M. Moore Foundation for nearly 40 years, she has furthered its mission to educate and serve others. Through her efforts, young people have enhanced access to growth and development opportunities, and libraries and museums have enriched their communities. The elderly have been supported in remaining in their own homes, abused women and children have been aided, and many other educational, cultural, health care, and human services have been provided to those in need.

For 35 years, Mrs. Duff has been a member of Muskingum’s Board of Trustees. As a trustee of the Beaver Area Heritage Foundation, she helped guide award-winning preservation of this richly historic area of western Pennsylvania. Voted one of America’s best local museums, the Beaver Area Heritage Museum also includes an 1802 Log House and the Revolutionary War-era Fort McIntosh, home to the nation’s first peacetime standing army, the First American Regiment.

Mrs. Duff is a fourth generation Muskingum alumna and is married to Dana L. Duff, also a member of Muskingum’s class of 1959. The Duffs are linked to many Moore, Warren and Anderson family members, including Nancy Moore Reilly ’63, J. Harvey Moore ’31, Bernice Warren Moore ’32, and Paul Miller Moore, Class of 1899.

During their senior year at Muskingum, the Duffs helped dedicate Paul Miller Moore’s gift of Moore Hall. a residence hall which today is the western terminus of the Walter K. Chess Center’s pedestrian bridge.

Reverend Frank Edward Hare has, throughout his 50-year pastoral career, devoted himself to the people of Appalachia. He has been called to numerous cooperative parishes across the Appalachian region, serving small membership congregations and creating special ministries for youth and other populations in great need. As the coordinator for ministry of the Coalition for Appalachian Ministry, he has guided the pastoral works of others. Currently, semi-retired, he continues his efforts with the Coalition for Appalachian Ministry as its interim coordinator. He is an active and energetic leader in a wide variety of community and civic organizations assisting Appalachian residents.

Rev. Hare regularly journeys to Rancho Ebenezer in Niquinohomo, Nicaragua. This demonstration and training facility, in one of the poorest regions in Latin America, is dedicated to improving the quality of lives through agro-ecological development. Rev. Hare’s work has provided rural farmers with safe electrical systems, enabling them to achieve more effective use of their land and better lives for their families.

He has been honored frequently for his extraordinary commitment to his ministry and his communities. Rev. Hare received the prestigious 2007 Jenco Foundation Award for Service and Visionary Leadership in Appalachia, for his contributions in advancing the dignity and sense of worth of the people in Appalachia. Other recognitions include the Pearl Jones Justice Award from the Commission on Religion in Appalachia, the Synod of Living Waters Award for Ministry with the People of Appalachia, and the Peacemaking Award from the Scioto Valley Presbytery.

Rev. Hare graduated from Muskingum with a bachelor of arts in history. He earned his master of divinity and master of theology from Pittsburgh Theological Seminary.

He and his wife, Catherine Kisken, reside in Amesville, Ohio, where Rev. Hare has served as mayor since 1991.

Mr. Lignos’ invention of DLT in 1984, for the Digital Equipment Corporation, made it economically feasible to use computer tape drives for storage and rapid retrieval of large quantities of information. DLT is recognized as the Fortune 500 industry standard for creating backup tapes of essential files, and is still widely used today. It has also become the industry standard for transferring original content to DVD format for commercial replication and distribution of motion pictures, music and other multi-media products.

During his 40-year career, Mr. Lignos held principal roles in engineering design, technology and product development at industry-leaders Quantum Corporation, Maxtor Corporation, and InPhase Technologies. He was responsible for the development of a dozen major products in the computer peripherals and data storage arena, guiding new products through all phases of creation, testing, manufacturing, marketing, sales and adoption by customers worldwide.

A prolific author of articles and technical conference presentations, Mr. Lignos has received numerous honors in the electronics design engineering industry, including the coveted “R&D 100 Award,” which recognizes the most technologically significant new products. He was granted a patent for his innovative work in computer system interfaces, and served on national and international engineering standards committees to establish DLT format guidelines.

A member of the Sarasota Sailing Squadron and the United States Power Squadron’s Sarasota Chapter, he teaches marine electronics courses to fellow boaters. He also serves as a volunteer guide at the MOTE Marine Research Laboratory and Aquarium, and is active in numerous church, civic and cultural organizations in the Sarasota area.

Recognized as one of the top ten litigators in the United States, C. Barry Montgomery is renowned for both his legal skills and his scholarship. Representing both plaintiffs and defendants in high-profile commercial litigation, product liability, and professional liability cases, he has brought more than 150 jury trials to verdict in federal and state courts throughout the country.

Mr. Montgomery is a prolific and respected author in the field of complex litigation, an editor for the International Association of Defense Counsel and a frequent presenter at national legal education seminars and conferences.

He has shared his talents as a dedicated member of Muskingum’s Board of Trustees for more than 30 years. A leader in his church and community, Mr. Montgomery has been an elder, deacon, and trustee for the Presbyterian Church and a director of the Presbyterian Home of Evanston, Illinois, and the Chicago Chapter of Explorer Scouts of America.

A debater and four-year varsity football player at Muskingum, he was honored with the William G. Moore Award as Outstanding Senior Athlete. He was a member of the 1955 Ohio Conference Championship Team, and was named to the 1958 All Ohio Conference first team and All Ohio first team.

He and his wife, Shauna Montgomery, reside in Chicago, Illinois and Lake Geneva, Wisconsin.