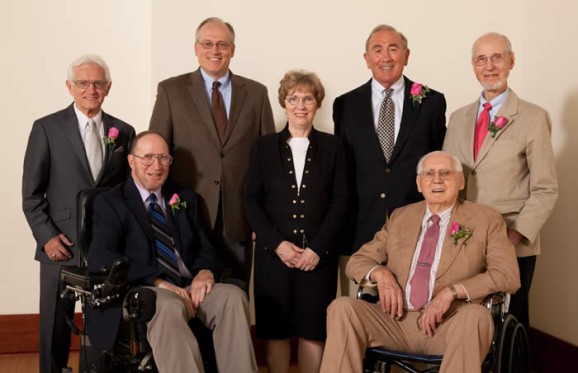 A highlight of the 2011 Alumni Weekend, held June 17 - 19 on the campus, was the presentation on June 17 of the Distinguished Service Award (DSA) to five alumni in recognition of their personal and professional achievements. The award is the university’s highest alumni honor.

William A. Cooper has had a profound impact on the economic landscape of Silicon Valley, the birthplace of the American advanced technology sector.  Renowned for his accomplishments on the college and professional football fields, he is an inspiration to scholar-athletes at all levels.

A professional football player for the San Francisco 49ers from 1961-1966, Mr. Cooper’s achievements have brought a positive and powerful spotlight to the educational and athletic ideals embodied by NCAA Division III.  In 2000, he became the first Ohio Athletic Conference player to be inducted into the College Football Hall of Fame in South Bend, Indiana.   As a power fullback for the Muskies, “Cannonball Cooper” gained 3651 yards rushing during his college career.  He led the Muskies to the 9-0 undefeated 1960 season with 1102 yards rushing that year, and was named to the 1960 Associated Press All-American Football first team.  He is a three-time member of the All-Ohio Athletic Conference first team, and the first and only three-time recipient of the OAC’s Mike Gregory Award.

Mr. Cooper earned his Muskingum bachelor’s degree in economics and a Master of Business Administration degree from Santa Clara University. He has served as a member of the Muskingum University Board of Trustees for over 25 years. He is married to fellow classmate Sandra (Sonie) Green Cooper, and through their wise leadership and generous support of their alma mater, they have furthered educational opportunities for generations and generations of students. The Coopers reside in Monte Sereno, California. They are the parents of Kent Cooper and Stephanie Kochhar, and they have five grandchildren.

Frank G. Helman is renowned for his expertise in international law, his philanthropic leadership, and his dedication to promoting global understanding and protecting human rights and dignity.

A member of the Muskingum class of 1951, Mr. Helman earned his Juris Doctor degree from New York University’s School of Law.  He is fluent in German, Norwegian, and Russian.  He served our country in the United States Air Force and in the diplomatic corps as Vice Consul and 3rd Secretary to the United States Embassy in Oslo, Norway.

Mr. Helman helped lead the development of multinational manufacturer Mannesmann Demag Corporation, serving as chief financial and administrative officer of  its United States operations for nearly twenty years.  In his legal practice, Mr. Helman specializing in complex trust, estate, and tax matters which cross international legal boundaries.  For two decades, he was a member of the prominent New York City law firm Walter, Conston, Alexander & Green, founded by his mentor and friend Otto L. Walter. Mr. Helman is a prolific author whose scholarly writings have been published in both U.S. and German legal journals.

As President and Director of the Otto and Fran Walter Foundation, Inc., Mr. Helman furthers the humanist and intellectual values exemplified by Otto and Fran Walter through projects which uphold and advance human rights.  Under his dynamic leadership, the Otto and Fran Walter Foundation has educated children in the world’s poorest areas, fostering hope, good health, academic achievement, and self esteem; fed the hungry in the United States and abroad, including those devastated by Hurricane Katrina; cared for Holocaust survivors; protected citizens from governmental human rights abuses in Europe and Central Asia; helped families break the cycle of domestic violence; and strengthened the performing arts and their transcendent power to uplift the human spirit.

Mr. Helman resides in Boothbay Harbor, Maine, where he is an active civic and church leader. He and his wife Martha Peak Helman are the parents of Mark, Lars, and Christian.

Jan A. Levy, M.D. changed lives each day of his distinguished thirty-nine year career as a general surgeon and medical missionary.

In 1969, he established his practice as a general surgeon in Radford, Virginia. Dedicated to continuous innovation and improvement in patient care, he introduced many significant new clinical procedures to the Radford Community Hospital. Highly-respected by his colleagues, he held important leadership positions as Chief of the Medical Staff and Chairman of the Department of Surgery.

Dr. Levy created the first emergency medical technician training program in his region, and through his clinical teaching, he generously shared his knowledge and expertise with new generations of health-care providers.

In his home community of Radford, Virginia, Dr. Levy is an active civic leader and Rotarian.  He served as the high school athletic team physician for twenty-five years, and was honored with the 1996-1997 McCue Award as Sports Medicine Physician of the Year for the Commonwealth of Virginia.

Dr. John C. Taylor has devoted his life to international service as an ordained minister, missionary dentist, and wildlife advocate.

He earned his Muskingum Bachelor of Science degree in Biology in 1937, along with letters in four varsity sports – football, wrestling, distance track, and field. He graduated from the Cedarville Seminary in Xenia Ohio with his Bachelor of Divinity degree in 1939 and from the University of Pittsburgh with his Doctor of Dental Science Degree in 1949.

Over the decades, Dr. Taylor’s travels have taken him to impoverished areas of India, Nepal, Liberia, Ecuador, Mexico, and the United States.  His exceptional background has allowed him to provide spiritual care and dental care, educate children and adults, and inspire others to become teachers, pastors, and medical professionals. He established many medical, dental, educational, and children’s home facilities in the regions he served.

Exemplifying his commitment to “all of God’s creatures,” he became a leading figure in the wildlife preservation movement in India. He is the founder of India’s National Cheetal Park and a co-founder of Indira Ghandi’s internationally-known “Save The Tiger” project, which became an important part of the Indian government’s wildlife conservation programs during the 1970s.

Dr. Taylor has answered the call to lead five congregations as pastor. He is a published author, whose books such as Wildlife in India’s Tiger Kingdom focus on topics of creation, mankind, and animals.

Dr. Taylor and his wife, missionary nurse Adah Boggs Taylor live in Irwin, Pennsylvania, where he has been an active civic leader. They are the parents of seven children.

Leonard M. Thomas is a consummate musician, internationally- respected for his distinguished accomplishments as a conductor, arranger, pianist, and vocalist.

He is best known for his thirty-one year association as accompanist, choral director, and principal arranger for Fred Waring and the Pennsylvanians, the popular orchestra and chorus who “taught America how to sing.” Touring with the group, Mr. Thomas’ appearances spanned countless radio and television shows, concert stages, and resort clubs. Performance highlights include sharing the stage with luminaries such as Bob Hope and Jimmy Stewart, and soloing at the White House and at New York City’s Carnegie Hall.

Mr. Thomas served as the Music Director for the renowned Fred Waring Choral Workshop held at Penn State University each summer, where Maestro Waring developed the groundbreaking method of choral articulations known as “tone syllables.” After Maestro Waring’s death in 1984, Mr. Thomas co-founded and led the U.S .Chorus in a series of nationally-televised PBS performances. For twenty years, Mr. Thomas was Keyboard Editor of the Shawnee Press and Recording Director of Glory Sound, meeting the demand by choirs across the nation for Fred Waring arrangements and recordings.

Throughout his career, Mr. Thomas has been an active and highly sought-after teacher, soloist, choir director, clinician, adjudicator, and choral festival conductor. He continues to program and accompany reunion concerts of the Pennsylvanians and to advance Fred Waring’s America, a foundation dedicated to preserving tapes and manuscripts spanning the seven decades of the Pennsylvanians’performances.

He holds a Muskingum Bachelor of Science degree in Music Education and is a member of the Beta Lambda Chapter of Phi Mu Alpha Sinfonia, the national music fraternity. He earned his Master of Arts degree in Sacred Music from Boston University, where he made his 1953 professional debut in a combo with the legendary Louis Armstrong and was the featured soloist with the Boston University Choir at Boston Symphony Hall.