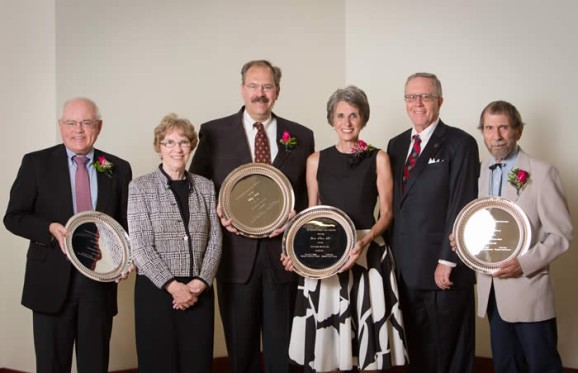 A highlight of the 2014 Alumni Weekend, held June 20 - 22 on the campus, was the presentation on June 20 of the Distinguished Service Award (DSA) to four alumni in recognition of their personal and professional achievements. The award is the university’s highest alumni honor.

William Accorsi has enriched the lives of others around the globe through his acclaimed work as an artist and author/illustrator.  His work appears in museum exhibitions, galleries, and private collections across the United States and abroad. He is the only artist to have been awarded two solo exhibitions at the Museum of Arts and Design (New York, NY).

His extraordinary work - known for its “great sense of play” – encompasses sculpture, painting, and drawing.  His three-dimensional pieces incorporate an extensive variety of materials including wood, wire, beads, buttons, and other found objects. The Maine Public Broadcasting Network documentary, “His Own Master: The Art of William Accorsi” (Jan Cannon Films) follows Mr. Accorsi at work in his studio as he reflects on a lifetime of art-making.

Mr. Accorsi is the author/illustrator of two monographs, Toy Sculpture and Accorsi Puzzles, and eight children’s books.  Known for their interactive puzzles and colorful tactile objects, his highly engaging children’s books have been recognized with many awards, including Parent’s Choice, and translated into multiple languages.  His works include 10 Button Book (19th printing), Ten Color Book, How Big is the Lion? My First Book of Measuring, and Apple, Apple Alligator from Workman Publishing; Friendship’s First Thanksgiving from Scholastic Inc; Short, Short, Short Stories, Billy’s Button, and Rachel Carson from Greenwillow; and My Name is Pocahontas from Holiday House.

Mr. Accorsi earned his Muskingum Bachelor of Science degree in Education. He taught for seven years before devoting his career to art and writing. A Renton, PA native, he currently resides in Woodstock, NY.

A leading clinician, scholar, and educator, Dr. Laura Hill has dedicated her career to serving others, as a specialist in eating disorder education, prevention, treatment, and research.

She is the founder and President, Chief Executive Officer, and Chief Clinical Officer of The Center for Balanced Living, a non-profit clinic in Worthington, Ohio.  She oversees the Center’s patient care offerings – ranging from a partial hospital treatment program to outpatient treatment to community support and education programs – and leads the Center’s ongoing research initiatives on integrating neurobiological research into new standards of patient and family care. She also serves as Clinical Assistant Professor of the Department of Psychiatry, in the College of Medicine of The Ohio State University.

She is the lead author of the Family Eating Disorder Manual (2012) and her articles regularly appear in professional journals. She has shared her work through more than 750 national and international conference presentations.  Active in her community, she has chaired the United Way’s Health Impact and Council and served on the Healthy and Fit task force.

Dr. Hill and her husband Nicholas Hill reside in Granville, OH and are the parents of Sasha Hill, a doctor of veterinary medicine.

Marshall C. Phelps, Jr. has served others worldwide through his expertise in intellectual property strategy, innovation, and entrepreneurship.

He is the Chairman of “Invention on Demand ®” company ipCreate and was previously Chief Executive Officer of the global intellectual property research community Article One Partners. Recognized as “the only person ever to lead the worldwide patent operations of two of the world’s most powerful technology companies,” he served Microsoft Corporation as Corporate Vice President, Deputy General Counsel for Intellectual Property and Licensing and Assistant Secretary, and IBM Corporation as Corporate Vice President of Intellectual Property.

A monthly contributor to Forbes Magazine, Mr. Phelps serves on the Intellectual Property Committee of the National Academies of Sciences and was elected to the inaugural class of the Intellectual Property Hall of Fame. He authored the critically-acclaimed book, Burning the Ships: Intellectual Property and the Transformation of Microsoft, and he is an active consultant and speaker. He serves as a member of the board of directors of multiple corporations and he has been a visiting professor in the schools of business, law, and engineering at institutions including Cornell University, Duke University, the University of North Carolina, and the University of California at Berkeley. He has received many honors and awards for his achievements.

A member of the Class of 1966, he graduated with a Bachelor of Arts degree in History and he holds a Muskingum Doctor of Humane Letters degree. He earned a Master of Science degree in Advanced Management from the Stanford University Graduate School of Business and a Juris Doctor degree from the Cornell University School of Law.

Mr. Phelps and his wife Eileen reside in New Canaan, Connecticut. They are the parents of daughter Meghan Martucci and son Marshall C. Phelps III.

Dr. Wiley “Chip” Souba’s career in medicine, science, and education has been distinguished by his academic excellence and educational vision.  His innovative approaches to leadership development have helped transform physician education and academic medical center administration.

A prolific author, he has published three books and nearly 500 scientific articles, abstracts, papers, and book chapters.  Dr. Souba has also served as Editorial Chair of the American College of Surgeons’ journal Surgery and as Co-Editor of the Journal of Surgical Research. He has received numerous honors and awards for his achievements including an honorary Doctor of Science degree from Muskingum University.

Dr. Souba is a native of Caracas, Venezuela. He and his wife Lynne reside in Hanover, NH, and are the parents of Matthew and Julie.