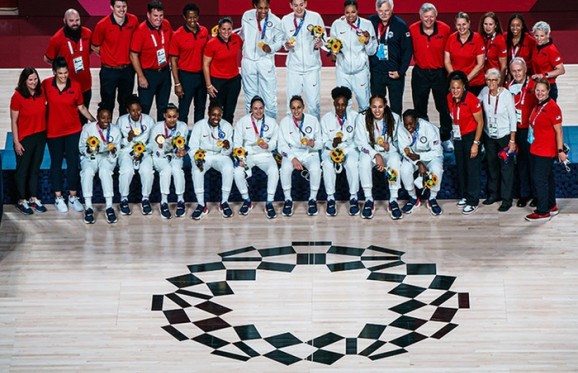 Team USA defeated Japan, France, and Nigeria in the preliminary round to finish atop Group B. In the medal round, Team USA beat Australia in the Quarterfinals, Serbia in the Semifinals, and Japan in the Gold-medal game. The U.S. has won 55 straight games at the Olympics and matched the record of seven straight golds in any Olympic team sport set by U.S. Olympic Men's Basketball Teams.

"I'm so proud of Dan Hughes and the impact he has had on the sport of women's basketball," said Muskingum University President Dr. Sue Hasseler. "This remarkable feat is so exciting for all of us at Muskingum as we share in his success. Go USA!"

Hughes, who recently retired as head coach of the WNBA Seattle Storm, led the team to the 2018 WNBA Championship. He ranks second in the WNBA in games coached (598) and ranks third in career victories (286). Hughes has been honored twice with WNBA Coach of the Year accolades (in 2001 and 2007) and served as a head coach for the 2009 and 2018 WNBA All-Star Games.

Hughes spent 11 years as the head coach and general manager for San Antonio, 2005-09 and 2011-16, guiding the Stars to six postseason appearances. Before San Antonio, he led the Cleveland Rockers from 2000-03 and was elevated to head coach in Charlotte midway through the 1999 season, posting a 10-10 record for the Sting. Hughes made 10 playoff appearances in 16 total seasons with those three franchises, including one WNBA Finals showing in 2008 with San Antonio.

Before the WNBA, he served as the assistant coach for the University of Toledo's women's basketball program (1996-97) and men's basketball program (1991-96). During his tenure with the Rockets' women's hoops team, Toledo posted a 27-4 record, winning the Mid-American Conference (MAC) Championship and notching an NCAA Tournament appearance. Hughes also served assistant coaching roles with the men's basketball teams at Mount Union College (1982-84 and 1985-91) and Baldwin-Wallace College (1984-85). As a graduate assistant at Miami University of Ohio, he helped the RedHawks to a MAC Championship and an appearance in the NCAA Regionals during the 1977-1978 campaign.

Hughes was a two-sport athlete for the Muskies, playing basketball for two years and baseball for three. As a two-time men's basketball letterwinner, he won two Ohio Athletic Conference Championships (OAC) in 1973 and 1974, finishing with a 19-4 overall, 10-2 OAC record, and 16-6 overall, 10-2 OAC record, respectively. He was a student assistant coach for the remaining two years, winning yet another OAC Championship in 1977. As a three-year baseball letterwinner, he was the OAC stolen base leader during the 1975 season.

He earned his bachelor's degree in physical education and history from Muskingum and a master's degree in education from Miami University of Ohio. Hughes is a member of the Muskingum University Athletics Hall of Fame. He and his wife, Mary Regula Hughes, a graduate of the Muskingum Class of 1978, are the parents of two children, Bryce and Sara. Their family also includes son-in-law Major Craig Bayer and grandchildren Logan, Jonah, Casey, and Penny.

Giving Through Muskingum: Matt Dansby ‘05
Back to top