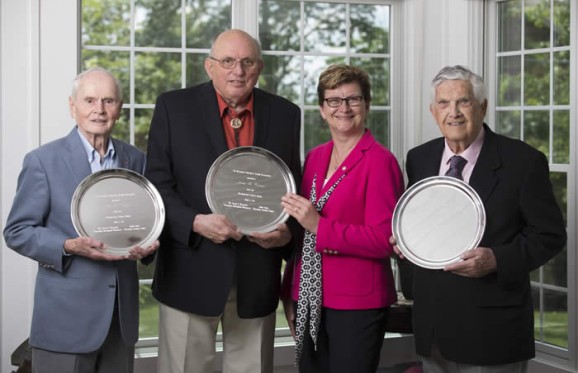 Bill Lovejoy graduated with a Bachelor of Science degree in Geology. He was Sports Editor for The Black & Magenta and a member of the varsity football and baseball teams during his Muskie years. Born into a four-generation family of Ohio coal-miners, he became the first in his family to graduate from college. He enrolled at Muskingum following his World War II service in the United States Navy.

He completed a Master of Science degree in Geology at the University of New Mexico in 1958. His early career as a geologist for Shell Oil Company took him to New Mexico, Texas, and Oregon.

In 1972, Bill earned his Doctor of Philosophy degree in Zoology from Oregon State University and joined the faculty of Georgia Southern University in Statesboro, Georgia. After a distinguished 19-year teaching career, he retired from Georgia Southern as Professor Emeritus of Biology.

Ben Shaver graduated with a Bachelor of Arts degree and certification to teach Physical Education, Biology, and History. A World War II U.S. Army Medical Corps veteran, he spent 30 months overseas before enrolling at Muskingum. He also earned a Master of Education degree from Ohio University.

He later served for 10 years as Director of Member Services for Firelands Electric Cooperative, where he authored many articles of local interest, won multiple state awards, and became a charter member of the Washington, D.C.-based National Rural Electric Communicators Association.

Ben resides in Perrysburg, Ohio. He was married for more than 61 years to Alyce Cowan Shaver '49 (1926-2011) and are the parents of Karen Shaver Swinehart '73 and Barbara Shaver Christensen. Ben and Alyce traveled extensively, visiting six continents. They dedicated the Ben O. and Alyce Cowan Shaver Seminar Room in the Roberta A. Smith Library in honor of the “Muskingum family of professors, staff, and fellow students” and also created a named Muskingum scholarship.

He served for three decades as the Director of Facilities Planning and Operations for the Newark, Ohio campus of The Ohio State University and Central Ohio Technical College (COTC). He oversaw the construction of multiple buildings on the Newark campus as well as three COTC extended campuses.

A noted historian and author, Jim has published ten historical fiction novels, with many portraying life on the Ohio frontier. His work Thunder in the Valley was recognized by the Western Writers of America with the 1996 Medicine Pipe Award for Best First Novel and the 1996 Golden Spur Award for Best Original Paperback Novel. Several of his books, Ozark Red and Colorado Sam, were created for young teen readers. He also co-authored the 40th anniversary history of Central Ohio Technical College Celebrating the Journey: Central Ohio Technical College 1971-2011.

Jim resides in Newark, Ohio with his wife Nancy Messimer Woolard, a retired school teacher. They are the parents of James M. Woolard ’89 and Jason R. Woolard. He is active in his church, his community, and multiple historical societies.