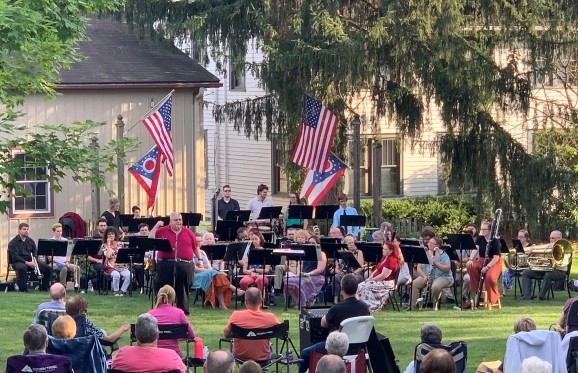 The Muskingum Valley Symphonic Winds is in concert for two performances during the Summer of 2022. This summer’s program, “A Touch of Broadway,” features medleys from classic Broadway shows.

Their next performance is August 13 at 7:00 p.m. at the Salt Fork Arts and Crafts Festival in the Cambridge City Park. On June 28, they were on stage at New Concord’s Village Park as part of the Celebrate New Concord concert series.

Muskingum students, alumni, and faculty represent half of the 40-member wind ensemble, which is directed by Dr. David Turrill, Muskingum University Associate Professor of Music and Director of Bands.

Founded in 1993, the Muskingum Valley Symphonic Winds is comprised of professional and talented amateur musicians from throughout southeastern Ohio.

Operating in partnership with the University and partially funded by the Ohio Arts Council, the group performs a wide variety of repertoire. During the academic year, concerts are presented in Brown Chapel on the Muskingum campus.