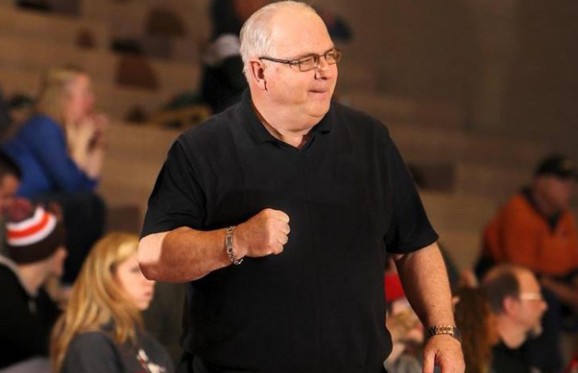 Former Muskingum men's basketball coach and All-American student-athlete Gene Ford '74 passed away on Friday at the age of 67.

His illustrious coaching career concluded at Muskingum where he was the head coach of the men's basketball program from 2007-2015. During his time on the Muskie sideline, Gene coached several 1,000-point scorers and led the Muskies to the OAC Tournament Final Four. His squads consistently were atop of the Ohio Athletic Conference in assists per game, fewest turnovers per game, best turnover/assist ratio, scoring defense, free throw shooting percentage, three-point field goal shooting percentage and rebounding defense. Before taking over the helm of the Muskie program, Gene served two years as an assistant coach on his son Geno Ford's staff at Muskingum.

As a standout student-athlete at Muskingum, the Black & Magenta graduate was a four-year basketball letterman and still ranks second all-time in scoring with 1,717 career points. He was an All-American honoree and a three-time All-Ohio Athletic Conference selection. Gene was named the Mike Gregory OAC Player of the Year as a senior.

A celebration of life honoring Gene Ford will take place at Cambridge High School starting at 10:00 a.m. on Saturday, July 6.

Muskingum mourns the passing of Gene Ford '74
Back to top