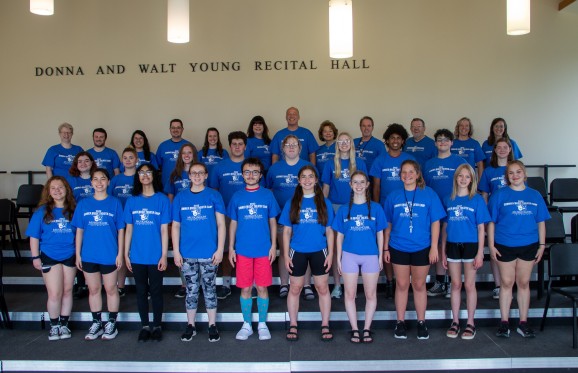 After a week of singing, dancing, acting and fun, the Summer High School Music Theatre CAMP will culminate in a musical theatre Showcase Performance at 2:30 p.m. on Saturday, June 25 in Muskingum University’s Caldwell Hall.

The performance is free and open to the public. There is ample parking, and the facility is handicap accessible. A “Greet the Performers” reception will follow in the lobby.

Students in grades 9-12 from 15 different schools will be featured. To prepare, the students participated in a week of musical training, including daily dance classes, private voice instruction, acting sessions with improvisation, master classes, and scene study. Evening recreational activities of square dancing, swimming, and movie musicals rounded out their week. Students will perform scenes from many different Broadway musicals.

Music Theatre CAMP has been recognized and supported in part by the Ohio Arts Council, which helped fund this program to encourage educational excellence, cultural enrichment, and economic growth. Additional support is also provided by the Taylor McHenry Fund and the Adams Family Fund. The CAMP is celebrating its 15th Anniversary!

Director, Carol Wilcox Jones, at cjones@muskingum.edu or the Muskingum University Music Department at 740-826-8095

Theatre Presentations: The Gypsy Woman
Back to top