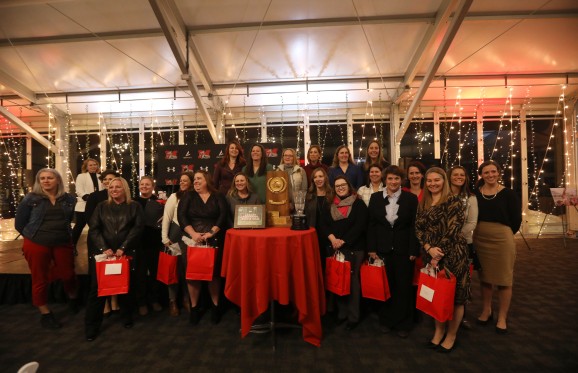 On January 28, 2022, Muskingum University’s 2001 national championship softball team was inducted into the Hall of Fame, becoming the first-ever team to be enshrined.

The team won the University’s first NCAA Division III team national championship on May 20, 2001.  The victory was the 47th of their season, setting a school record which still stands as the most wins in a campaign.  On their way to the World Series, the team captured the Ohio Athletic Conference (OAC) Regular-Season Championship, the OAC Tournament Championship, and the NCAA Central Region Championship.  They won 34 straight games to end the year, setting the NCAA Division III record for the longest winning streak.

The ceremony took place during the University’s annual Night of Impact, presented by Carol Goff & Associates Real Estate at the EagleSticks Golf Club in Zanesville, Ohio. The softball team was also honored on January 29, 2022, during the men’s and women’s double header basketball game on campus.

To share in the celebration, view the Night of Impact highlight video or event livestream.

Congratulations once again to the members of the 2001 national championship softball team!

Join Us on July 15, 2022 for the Annual Athletic Booster Golf Outing

Winter Sports in Full Swing
Back to top