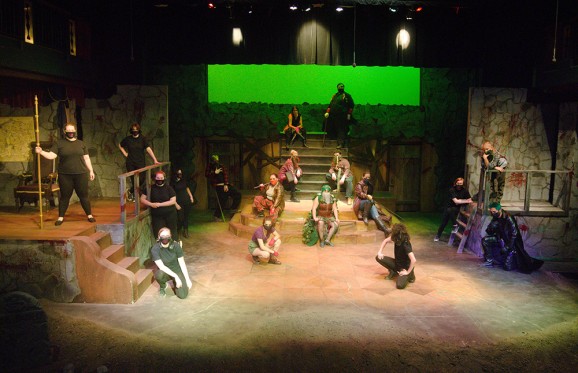 When Muskingum’s Theatre department cast Living Dead in Denmark – an action-adventure/horror sequel to William Shakespeare’s Hamlet featuring the undead – in December, cast and crew had no idea how things were about to change. After spending the next three months preparing and rehearsing the performance, COVID-19 threw a sizeable wrench in the production machine. Forced to leave campus for the safety of all in March, Cassie King, assistant professor of Theatre, and her team were determined to finish the project.

“Our theatre students developed a fairly complete production by the time we went to remote learning and when I saw there was an opportunity to present the show when we returned in the fall, I jumped at the chance,” said King.

While bringing the show back was exciting for the crew, it also was quite the undertaking due to several COVID-19 adjustments, like the need for all performers to wear masks. According to King this worked surprisingly well for Living Dead in Denmark as the apocalyptic subject matter provided a logical reason why the characters were wearing masks, and even added to the production. “The masks became a part of the costume design and helped differentiate between characters for those actors who played several parts,” said King.

Another adjustment was how to present the performance while adhering to social-distancing guidelines, both on and offstage. Onstage, for example, fight scenes had to be adjusted to eliminate close contact and many other scenes were tweaked to add appropriate spacing between actors. As a reminder, and to add a bit of levity, the crew also created a “six-foot stick” prop that was used at various points in the performance when characters were supposed to be close to one another.
Offstage, the production crew added additional dressing rooms to accommodate smaller numbers and created a traffic flow that eliminated close contact backstage throughout the show.

Living Dead in Denmark was truly a Muskie production comprised of nearly 20 students and staff filling a number of roles, from cast to crew, to artists creating specialty props and costume pieces, to alumnus Eli Branham ’20 composing the score. Muskingum’s student-driven Orbit Media began collaborating with the Theatre department in mid-summer to plan the live stream for the production. Under the direction of Dr. Lisa Marshall, associate professor of Communication and director of broadcasting for Orbit Media, Michael Carvaines, assistant professor of Media Communication, and others, Orbit media students filmed, directed, and engineered the production to make it accessible to all.

“The dedication of the Muskingum cast, crew, and production team for this performance was unmatched and ultimately led to an expanded audience of alumni and relatives who live outside of the area who were able to view the event online,” said King. “With the full support of the administration, the department pulled off a live theatre event, which was incredibly rewarding.”

Next up for the Theatre department is The Curious Case of the Popstar and Her Penguins which will be live streamed on Oct. 2 and 3 at 8 p.m. The show features 20 first-year students as performers and technicians, and five upper-class students as directors. For additional information on the Muskingum Theatre department, please click here.