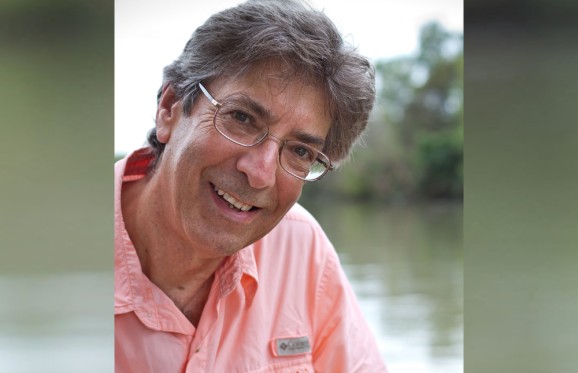 Author and researcher Dr. Tim M. Berra was selected to give the second annual lecture in The John Glenn Distinguished Lecture Series in Earth and Planetary Sciences on March 20 at Muskingum University. Dr. Berra’s presentation, “Chasing Nurseryfish and Avoiding Crocodiles in Northern Australia,” provided details of his research and adventures working on the life history of the nurseryfish.

He is the author of more than 85 scientific papers and eight books, including “Freshwater Fish Distribution,” which features 169 maps, 324 fish drawings and 1,700 references (University of Chicago Press, 2007). His other works include “Charles Darwin: The Concise Story of an Extraordinary Man,” (Johns Hopkins University Press, 2009) and “Darwin and His Children: His Other Legacy” (Oxford University Press, 2013) which covers the lives of the 10 children of Charles and Emma Darwin.

A former editor of “The Ohio Journal of Science,” Dr. Berra was a member of the board of trustees of the Columbus Zoo & Aquarium, where he served on the conservation and collection management committee. He was also the ichthyology book review editor of “Copeia,” the journal of the American Society of Ichthyologists and Herpetologists.

In 2001, Dr. Berra conducted work on the life history of the nurseryfish in Australia, supported by the National Geographic Society and the Columbus Zoo & Aquarium. His nurseryfish research continued in Australia in 2003, 2004 and 2005 and again in 2011, 2014 and 2016. He delivered the keynote address at the bicentennial celebrations of Charles Darwin’s birthday at Charles Darwin University in 2009.

Dr. Berra received a Ph.D in biology from Tulane University in 1969.

The John Glenn Distinguished Lecture Series in Earth and Planetary Sciences was established and endowed by alumnus Bill Lovejoy ‘51 and his late wife Martha Johnson Lovejoy ‘52 to honor the memory of John Glenn ‘43, one of Muskingum University’s most accomplished and inspiring alumni. The lectureship, founded in 2017, features an annual speaker, chosen by a committee of faculty members from the Muskingum University departments of biology, geology and physics. The inaugural lecture was given by Dr. Scott E. Parazynski, a veteran of five Space Shuttle missions, physician, explorer and entrepreneur, who flew on mission STS-95 with Glenn in 1998 as his personal physician.

Celebrate the Holidays at Muskingum
Back to top