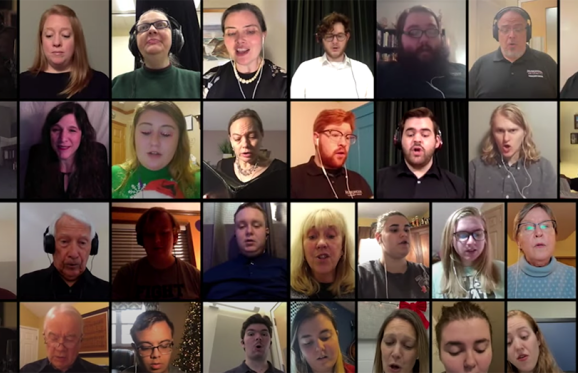 In late October when Tim Sarsany, interim assistant professor of Music and director of Choral Activities, was approached by the Newark-Granville Symphony Orchestra (NGSO) to potentially have students participate in the group’s virtual production of the “Messiah,” he jumped at the chance. “It was the perfect way to end the semester.”

For more details, see the Q&A with Professor Sarsany below:

1.Tell us a bit more about NGSO’s Virtual “Messiah” production and who was involved?

A: I received an email from the NGSO looking for singers to participate in the project. They wanted to feature several moments from Handel’s “Messiah,” which included four choruses. In the summer, the NGSO pre-recorded videos to accompany the production which they placed online. They also provided sung rehearsal tracks of the four choruses to assist in learning. The production’s virtual chorus was mostly comprised of Muskingum Concert Choir singers, but also included singers from other community and church choruses. Soloists were also brought in to sing their respective recitatives and arias that were included in the song set.

2.    How did Muskie participants prepare for this unique opportunity?

A: We started the process in November with rehearsals. After rehearsals, the students had to work on the virtual elements of the production on their own. This entailed using a phone and wearing headphones to record a video singing each of the four choruses in the “Messiah.” These various recordings were then compiled like many of the virtual choir videos you might have seen over the last several months, which show every participant’s video synched together in the final production.

3.    Why was it important to be a part of this amazing event?

A: This was a fun and exciting project that allowed us to showcase the talent of our students to audiences outside of campus. We really wanted to highlight that even under strict and protective COVID-19 guidelines, we are thriving musically at Muskingum. I’m also always looking for opportunities to foster relationships with fantastic arts organizations for possible future collaborations, so this felt like a no-brainer for our group.

4.    You mentioned above that joining the NGSO in its production of the “Messiah” was the “perfect way to end the semester.” Why is that?

A: In a “normal” year, we would spend the semester preparing music for the annual Christmas Festival. Since we were unable to do so this year, the virtual “Messiah” project was a wonderful way to finish out the semester rehearsing music that culminated in another successful performance.

5.    Is there anything else you would like to say about your students or the performance?

A: The fall semester was a constant stream of adjusting and adapting and I’m very grateful for our students’ drive, determination, and flexibility to collectively make some beautiful music under challenging conditions.

Muskie Musicians Selected for Honors Festival
Back to top