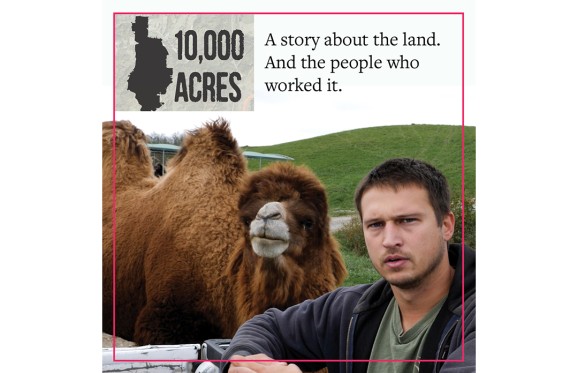 On October 27, the Muskingum University Biology Department and the biology honorary society Beta Beta Beta premiered “10,000 Acres.”  This multimedia documentary focuses on the history of land use and people in the area now occupied by The Wilds, the largest conservation facility in North America. The documentary looks at the land’s prehistory, its time as a farming community and strip mine, and its reclamation and transformation into a wildlife preserve.

The history of The Wilds features multiple Muskingum connections. Alumni Dorothy Montgomery ’53 and Hal Burlingame ’62 were interviewed on their recollections of their families’ farms. Muskingum President Emeritus Samuel W. Speck, Jr. ’59 authored Ohio’s Strip Mine Reclamation Act while serving in the Ohio House of Representatives. His bill was the model for the federal legislation whose impact is felt throughout Appalachia, the Surface Mining Control Reclamation Act of 1977.

“10,000 Acres” is a web-based interactive documentary, including written narratives, photographs, videos, audio clips, and graphics. The documentary’s director is filmmaker and writer Doug Swift, a professor of Journalism and English at Denison University, who taught at Muskingum in the early 1990s when The Wilds was created.

A link to view the documentary is expected to be made available later this year. A Zanesville Times Recorder article recently spotlighted the project.