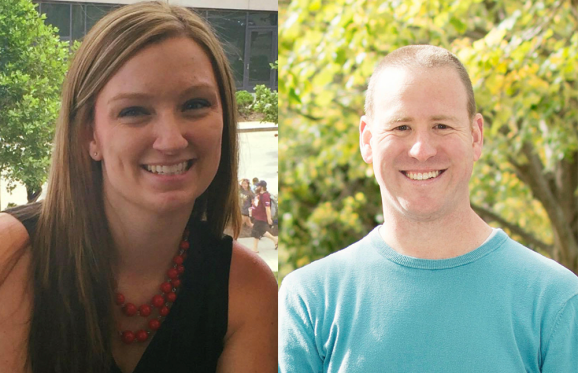 Memorable. Historic. Significant. Scrutinized. Any and all of these adjectives can be used to describe the 2020 Presidential election. The voting process throughout the country, made possible each year by dedicated staff and volunteers who work for months at a time to prepare for an election, is now more than ever before under the microscope of the American public. Add into the mix a global pandemic that drove record numbers of early in-person voting and voting by mail, and the need to run an efficient, compliant board of elections becomes paramount. Enter Muskie graduates, Stephanie Raach Slifko '07 and Brandon Clay '07.

Slifko and Clay each serve as the director of the board of elections in Coshocton and Union counties, respectively. They recently sat down with a representative from Muskingum’s Marketing department to share their unique perspectives and experiences of the 2020 presidential election in a battleground state.

Slifko: In a nutshell, my job is to make sure everyone in Coshocton County is able to vote and has confidence in the process. This is a year-round role, during which our team works with elected officials and those aspiring to run for office.

During a presidential election, we typically begin our work 120 days in advance to prepare for voters, which includes important behind the scenes tasks such as maintaining and managing the voter roll for the county and preparing polling locations.

Clay: As the director, I oversee all facets of the election process in Union County. The responsibilities of the position vary depending on the election cycle. All year long, our office processes voter registration which includes updating information such as names and addresses.

As Stephanie mentioned, election preparation begins many months before any voters cast their ballots. Our office audits campaign finance reports; verifies signatures on petitions; secures polling locations and evaluates them for ADA compliance; manages precinct lists; recruits and trains poll workers from both major parties; prepares absentee ballots including those for military and overseas voters; and prepares and tests all voting equipment.

The presidential election was widely discussed and analyzed, to say the least. What was the overall vibe or feeling from voters in your county?

Slifko: The pandemic changed everyone’s approach towards the election. We saw a record number of people voting early in one way or another. We obviously saw republicans, democrats, and independent party people who were very passionate about the candidates they support, but, for the most part, everyone had this sense of understanding of the importance of voting. We had people who were 18 voting for the first time, alongside people who were 65 doing the same. So, in this presidential election, we definitely saw a wide range of firsts.

Clay: In Ohio, all boards of elections are staffed equally by both major political parties. While staff members are partisan, we leave our political hats at the door, and our goal is to act in the best interest of the voters.

This election was unique in that we expected high voter turnout during a pandemic and our priority was to do everything possible to make the process safe for our staff and voters. Overall, voters were excited to cast their ballots, and I think they appreciated having options for how to vote and remain safe. Folks voted by mail, voted early in-person, and voted on election day at our polling location.

Speaking of various ways to vote, what did voting activity look like during this presidential election?

Slifko: Typically, in any type of election, we expect all kinds of voting trends. In 2020, we saw nonstop early voting. Our voter numbers gradually grew each day in a county where we have 22,000 registered voters. We saw record numbers of 400 people a day, as opposed to 100 in the 2016 election, and this was a trend we were seeing throughout Ohio.

Clay: We processed a record number of votes this election with 33,705 votes cast in Union County. In 2016 we had 77% voter turnout, this year we had 81%. We also set records for absentee voting in this election, both by early voting in the office, and by mail. In the 2016 presidential election, about 35% of our voters cast their ballots before election day. In 2020, that number rose to about 60%.

What is happening behind the scenes at your office leading up to a presidential election?

Slifko: Our dedicated group is made up of full-time staff, seasonal employees, and volunteers. Many days we are logging 12-15 hours, and as mentioned before, the traffic is nonstop. The people who volunteer for elections 4-6 weeks in advance are amazing as they are doing this as a service, not for a paycheck. In this election not many days were similar to the next due to the pandemic, and our staff rolled with the punches.

For the presidential election, we technically started prepping in June of 2019 when we upgraded our cybersecurity, which was a huge accomplishment across Ohio. This involved training staff and working with so many people to complete this ambitious process. Eyes have always been on Ohio, and we were not only prepared, I believe we set the standard in 2020.

Clay: Absentee voting begins about four weeks prior to the election and our office was busy from the first day of early voting, which never really subsided. The final two weeks before the election, I was working 10-12 hours a day, and on election day I worked 17 hours. The Saturday through Monday before election day was our busiest stretch.

We brought on seven additional seasonal staff members who worked daily in the office leading up to the election and we recruited and trained about 250 poll workers. So there really is a lot going on behind the scenes that the public might not know about.

Is election day a relief or are there still “miles to go?”

Slifko: People need to understand that in elections everything is accounted for and there is a huge accountability process. For every vote there is a ballot, and our job is to make sure every vote is there and is legal. So that is what we spend most of our time doing on election day.

When the polls close, we start processing provisional ballots and reconciling voter history. We also do the research to make sure every legal vote counts in Ohio, so there are definitely miles to go on, and after, election day.

Clay: During election day we field many questions from both voters and the poll workers who are in the trenches. After the polls close, the real work for us begins. We assist poll workers in closing the voting locations. All election supplies are then returned to the office and we begin to tabulate the votes. On election night, the polls close at 7:30 and it usually takes about three hours to finish the tabulation. Even then, the election is not complete. We are still processing provisional ballots that were cast on election day and absentee ballots that were postmarked before election day that arrived up to 10 days after the election. Approximately two weeks after the election, the results are certified.

Why is your work important?

Slifko: The work we do is amazing to think about. On election day there are 4000 polling locations staffed by 56,000 workers in 88 bi-partisan counties in Ohio. Every single one of those 56,000 people are truly defending democracy by instilling confidence in the election process, and to me that is so important. I want my community to be confident in the work we do and confident in the results we are producing.

Clay: Voting is the backbone of our democracy and every day I get to be on the frontlines of this process, which isn’t a responsibility I take lightly. So many people work tirelessly all year - election officials, vendors, poll workers, and volunteers. There is a feeling of “we’re all in this together.” I am proud of the work we do on behalf of the voters of Ohio. It’s incredibly rewarding to serve the public in this way.

How did your time at Muskingum prepare you for this role?

Slifko: I enjoyed my time at Muskingum immensely. I was involved in the Communications department where I discovered my passion for sales and marketing. Having that 1-on-1 experience with people and getting to know others, both on and off campus, while working in the PR department was invaluable. I had so many great role models at Muskingum who really prepared me to serve my community.

Clay: At Muskingum, my degree was in political science and public affairs. While earning my degree, I knew I could have the biggest impact at the local level of politics, but I couldn’t imagine I’d end up at the board of elections. Muskingum set me up for success by challenging me and helping me realize I can accomplish anything. On a personal level, I met my wife, Christina Eichenauer Clay '07, during freshman year, so Muskingum is really where my life began, and I couldn’t be happier with my choice to be a Muskie.