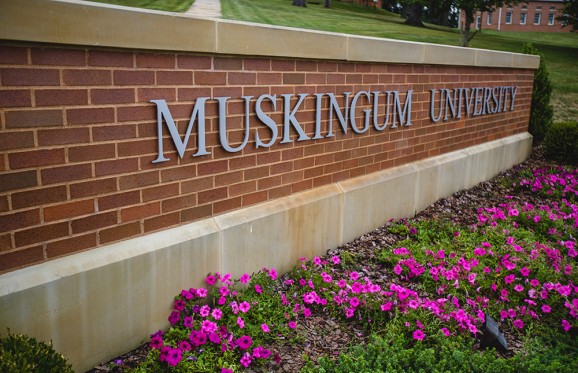 Melanie Hilton '07 is the recipient of a prestigious 2007-08 Ambassadorial Scholarship, awarded by the trustees of The Rotary Foundation, a not-for-profit corporation that supports the efforts of Rotary International, to achieve world-wide goodwill.

"The Rotary Club of Cambridge, Ohio, is extremely proud to sponsor Melanie Hilton as our club’s first Ambassadorial Scholar. I was very impressed with her credentials, her international travel experience, and her maturity,” said Dick Brixner, past district governor of Rotary International.

"Ms. Hilton will be a great ambassador for Rotary, and will make the Rotary Club of Cambridge and Muskingum College very proud,” he added. “We look for great things from her in the future and her attitude will go a long way toward world peace and understanding.” Brixner is the Ambassadorial Scholar counselor for the Cambridge Rotary Club and was on the selection committee. The Ambassadorial Scholarships are awarded yearly to some 1,000 students around the globe to study in another country for three months to two years.

“Developments around the world challenge us to re-think our role in the international community,” said Hilton. “We students who will be the next generation of leaders need to identify our place in this increasingly-complex global  picture,” she said. “I hope to use the Ambassadorial Scholarship to pursue a degree in international relations in order to understand, serve and act as a liaison between Rotary International and people oppressed by culture and tradition, governments, natural disasters and their ill fate of being born into a poor family in a poor country.”

Hilton’s exemplary undergraduate career at Muskingum College includes majors in international business and international affairs and minors in mathematics and Spanish. She is a Presidential Scholar at Muskingum, one of the college’s highest scholastic honors.

Hilton is from Deharadun, India and is a 2003 graduate of the Welham Girls’ School in Dehradun.

During Fall 2006, Hilton was a John Glenn Fellow and held an internship with the Federal Judicial Center in Washington D.C. The internship was part of the Washington D.C. Academic Internship Program of the John Glenn Institute at The Ohio State University. As a fellow, she authored a policy paper, “International Law and U.S. Domestic Law: A Marriage That Failed.” Senator Glenn is an alumnus and trustee of Muskingum College.

In 2005, Hilton’s interest in international affairs also led her to intern with the United Nations’ International Criminal Tribunal for the former Yugoslavia, The Hague, The Netherlands, where she worked in the General Service section. She was one of only a handful of undergraduates to intern there, as most interns are graduate students.

Additionally, she served as a Muskingum College Summer Fellow in 2004, working on research and administration for a project on poverty and education.

Her extra-curricular activities include service as president of the Model United Nations Club at Muskingum, and as a member of the World Vision Organization.