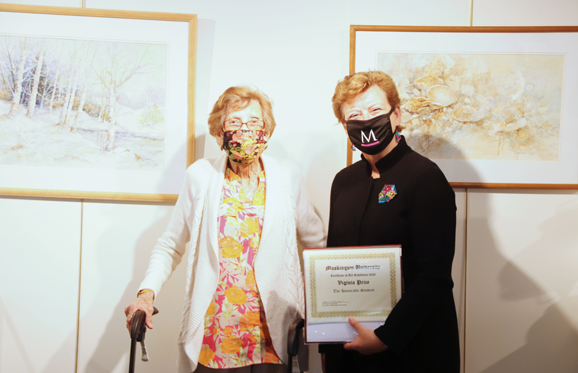 When Virginia Price graduated from Wells High School in Steubenville, Ohio, at 16 years old, she considered many regional colleges, finally deciding to attend Muskingum University. But, as it often happens, life sent her down a different path that led to attending college close to home at Steubenville Business College. After graduation Mrs. Price worked hard, married, saw her Army husband Jack off to war for 52 months (she wrote him a letter every day), had three children, and thankfully, in 1947, began oil painting.

As Mrs. Price raised a family she continued working and painting, the latter of which led to an acclaimed body of work that includes awards in competitions across the country, four one-woman exhibits, and participation in local and regional art shows. According to a recent article by Muskingum’s Orbit Media, her work also appeared in private and commercial collections, like the Governor’s mansion in Ohio, and multiple universities and businesses.

After judging an art show Mrs. Price entered, Yan Sun, professor of Art at Muskingum, instantly recognized her talent, deeming her water color piece the best of show. After hearing the then 98-year-old’s story and connection to Muskingum, he invited her to showcase her work at the University. So, 84 years after hoping to enroll, Mrs. Price exhibited “100 years of Art and Colorful Life” at Muskingum University’s Louis O. Palmer Gallery in September 2020…but the remarkable story doesn’t end there.

When Muskingum President Susan Hasseler learned of Mrs. Price’s journey back to New Concord more than eight decades later, she decided to bring the story full circle by naming Mrs. Price an honorary student of Muskingum University. In a special ceremony on September 29 with Mrs. Price’s three children Bill, Debra, and Jack in attendance, President Hasseler presented the official certificate naming her an honorary student and thanked her for her inspirational story.

"I look around this gallery at these beautiful pieces and hear the wonderful stories from your family and I am inspired by your lifetime commitment and contributions to the world of art," President Hasseler said. "I am so pleased to celebrate you and your loved ones in this way because your work is exquisite, and your story is uplifting."

Mrs. Price’s oldest son Bill, who drove nearly 500 miles from Petersburg, Virginia, with his wife Anita to attend the ceremony, expressed gratitude on behalf of his family.

“When you think about how everything came together – how she wanted to come to Muskingum and now is back on campus as an honorary student at 100 years old – the odds of this happening are astronomical,” said Bill. “We are all overwhelmed with this tremendous honor.”

Bill said he and Anita, along with his sister Debra and brother Jack, are their Mom’s roadies as she continues to travel and display her work in various art exhibits and shows throughout the year. Although she’s had to cut the number of shows from 8-10 per year to 4-5, Mrs. Price is still very active and involved each event.

“She really enjoys the interaction with people that see her paintings,” said Bill. “And, of course, they are amazed to find out her age and that she’s still painting.”

Closing the ceremony, Mrs. Price emotionally expressed her gratitude to the University.

“I never dreamed of a show at Muskingum University after all of this time and I’m sure my mother, dad, and husband are all smiling in heaven,” said Mrs. Price. “There are only four words to sum this up…my cup runneth over.”

And for those of you who missed the opportunity to view Mrs. Price’s exhibit on campus, don’t worry, Professor Sun has committed to showcasing her art again next year when she’s 101.