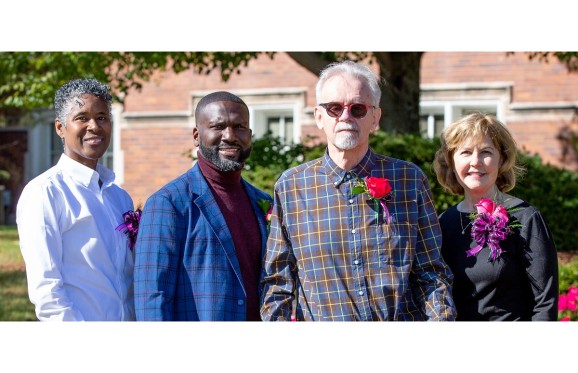 Muskingum University recognized Ramone Davenport, Jane Marshall, Alicia “Kaye” Matthews, and Dennis O’Neil as a distinguished alumni at the annual Alumni Banquet. The event was held during the University’s Reunion Weekend at Homecoming.

Muskingum University’s Distinguished Service Awards recognize and honor alumni who have distinguished themselves through their professional endeavors and exemplary service to mankind.

Upon his graduation, he became the first charter school teacher to be hired in the state of Ohio. Now as Director of The Dohn Community High School in Cincinnati, he provides a value-driven education for at-risk youth. Since 2009, he has grown Dohn from one location with 50 students to five locations with more than 800 students meeting or exceeding Ohio Board of Education charter school standards.

His most recent project, Dohn’s Fitness Academy, transformed a nearly condemned building into a vibrant home for student physical fitness classes, a fitness center open to school staff and the surrounding community, and a training hub for Dohn’s football, basketball, track and baseball teams. Davenport is a role model for his students, mentoring them to success through positive action, responsibility and respect.

She has served on the Alumni Council for many years. The Technical Director of the Cardiac Ultrasound Laboratory at Massachusetts General Hospital for 38 years, she trained with two of the most prominent pioneers in the field of echocardiography. Dr. Marshall is internationally recognized as a leader, educator, researcher, and mentor with numerous peer-reviewed publications and contributions to a variety of field standards.

After graduating from Muskingum University, Dr. Matthews earned Master of Science and Doctor of Philosophy degrees in psychology from The State University of New York (SUNY) Binghamton. Currently Professor and Clinical Psychologist at the University of Illinois at Chicago, they research health inequalities among underserved populations, developing culturally targeted health risk reduction strategies.

In 2014, Dr. Matthews’s work on tobacco cessation resulted in the Chicago City Council’s adoption of an unprecedented ordinance prohibiting the sale of mentholated tobacco products within 500 feet of school buildings. Chicago was the first jurisdiction to include menthol in regulations for flavored tobacco sales – a highly significant step given that the tobacco industry disproportionately targets mentholated products advertising toward African American and Latino youth.

Known for his pioneering work in screen printing, he is the Founder and Director of Hand Print Workshop International (1984) and Emeritus Professor of Fine Art of George Washington University’s Corcoran College of Art and Design.

O’Neil broke international barriers in art and collaboration when he created the Moscow Studio in 1991. This collaborative printmaking studio was born in the midst of the collapse of the Soviet Union and became deeply influential in helping Russian artists “re-form connections with their past, not just for themselves but for their fellow citizens as well.”

Florida Dinner Dance Cruise set for April 19, 2020
Back to top