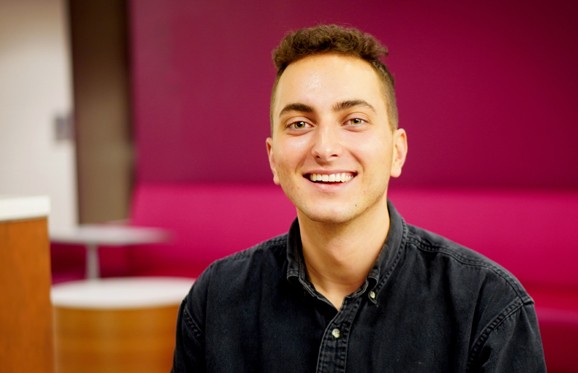 He is currently participating in the Washington Academic Internship Program at the John Glenn College of Public Affairs through The Ohio State University, interning with United States Congresswoman Marcy Kaptur of Ohio’s Ninth Congressional District, which spans 141 miles along Lake Erie’s coastline and serves the communities of Cleveland, Toledo, Lorain, and Lakewood.

“This week was by far the most rewarding experience I have been able to have so far,” Nick shares. “I was able to write a speech for Representative Kaptur in memory of the passing of Justice Ruth Bader Ginsburg. The Congresswoman read my draft word for word!”

Nick previously served a summer internship as a Legislative Aide for Pennsylvania State Representative Donna Bullock of Philadelphia. “Being able to help Rep. Bullock’s constituents with issues that impact their daily lives, and to help support legislative efforts to bring about positive change was an amazing opportunity.  It was a life-changing experience that cemented my decision to pursue a public service and leadership career.”

Nick enrolled at Muskingum intending to be an education major, and recalls that through his classroom and education field experiences, “I began to realize that my heart was leading me toward a different career – one that was based on my love of politics and would allow me to work for social change in the public leadership arena.  My professors and advisors were extremely supportive as I discovered that political science was the right major for me.”

Nick is from Columbus, Ohio.  He is an active and engaged campus leader who has served his peers as the Student Senate 2018-2019 Vice President, Resident Assistant for the Lakeside Houses, and Social Chair of Kappa Sigma. A pole vaulter since high school, he is proud to be a Track & Field Team NCAA Division III student-athlete representing the Fighting Muskies.