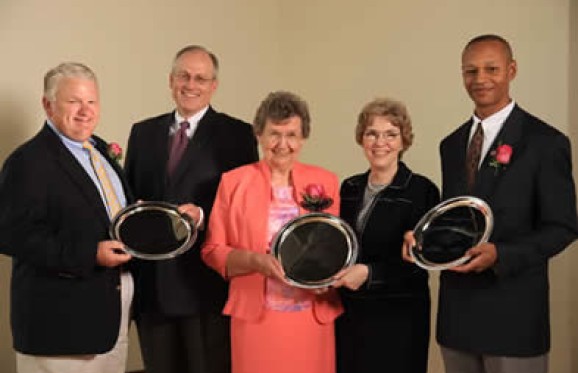 A highlight of the 2010 Alumni Weekend, held June 18 - 20 on the campus, was the presentation on June 18 of the Distinguished Service Award (DSA) to three alumni in recognition of their personal and professional achievements. The award is the university’s highest alumni honor.

Keith S. Campbell has strengthened our national economic landscape and the social fabric of American communities, profoundly changing the lives of others. Renowned for his prominent leadership in a highly competitive global industry, he was chosen to serve our nation and the world with his expert financial acumen as a Director of the Federal Reserve Bank of Philadelphia.

Mr. Campbell is Chairman of the Board of Mannington Mills, Inc., one of the world’s largest manufacturers of commercial and residential flooring. He is the fourth generation of his family to lead this award-winning, privately-held firm. He joined Mannington following his Muskingum graduation and has served in diverse positions throughout the company. He joined the Board of Directors in 1983 and was appointed Chairman in 1995. Under his leadership, Mannington has been recognized for its innovation in design and manufacturing and for its family-oriented corporate citizenship and outstanding commitment to the home communities of its seven manufacturing plants.

Since 2008, Mr. Campbell has served on the Board of Directors of the Federal Reserve Bank of Philadelphia, which leads the Federal Reserve’s Third District of Delaware, Eastern Pennsylvania, and the nine southern counties of New Jersey. Financial trends in this vital manufacturing region are an important barometer for the interconnected national and global economies.

As a civic leader, Mr. Campbell’s wise guidance touches the lives of those served by New Jersey-based educational, health care, and community development organizations. He chairs Stand Up for Salem – a multi-million dollar downtown redevelopment initiative, serves as trustee of the John B. Campbell Center, and is past Chair of the Board of Memorial Hospital. He also serves his alma mater as a Muskingum University Trustee.

Mr. Campbell earned his Bachelor of Arts degree with majors in history and business. He has been honored for his significant achievements with a Doctor of Public Service degree from Muskingum University.

He and his wife Shirley reside in Salem, NJ. They are the parents of John, Christopher, and Kimberly.

Dr. Brockton J. Hefflin changes the lives of others in the United States and abroad through his leadership in national and international public health and safety policy initiatives.

A Medical Officer in the United States Food and Drug Administration’s Center for Devices and Radiological Health since 1995, he works to ensure that medical devices are both safe and effective for human use. He is the USFDA representative to the international Global Medical Device Nomenclature (GMDN) Project, an initiative of the World Health Organization. He and his fellow delegates are creating global standards for thousands of medical device product groups, improving the quality of health care around the world.

He is a trained field epidemiologist and a graduate of the Centers for Disease Control and Prevention’s Epidemic Intelligence Service (EIS). As an EIS Medical officer, he responded to environmental threats to public health: fuel additive exposure in Alaska, recurring dust storms in Western states, and an industrial mercury explosion.

Dr. Hefflin travels regularly as an international medical missionary, working to improve health care in Central American, Africa, and Western Asia. He furthers his own cultural understanding of those he serves, exploring significant sites such as the Egyptian Nile, pre-Columbian Mayan cities, the Great Stone Monuments of Zimbabwe, and the Etruscan civilizations of Tuscany.

The U.S. Department of Health has acknowledged his leadership and achievements with numerous commendations and recognitions, and he has been honored with a Doctor of Public Service degree from Muskingum University.

A second-generation Muskie, Dr. Hefflin is the son of Ruth Champlin Hefflin ’60 and the late Dr. Charles Hefflin, a prominent Pittsburgh physician. He resides in Montgomery Village, MD.

Marilyn Jean Woodyard Lockhart helped pioneer new roles for women in mathematics and physics. She was at the forefront of the emerging computer programming profession, which would provide unprecedented opportunities for succeeding generations of female scientists and business leaders.

Marilyn Lockhart began her career at International Business Machines in Poughkeepsie, NY, in a historic era – mathematicians and computer scientists were just beginning to build the foundations of modern computing, exploring the applications of computing power to the needs of businesses large and small.

She was hired in 1957 as a member of an elite cohort of mathematicians whose task was to prepare sub-routines for the early large-scale computers. The cutting-edge work of Mrs. Lockhart and her colleagues was a driving force behind IBM’s transformation from a producer of typewriters and tabulating equipment to a global leader whose data processing innovations would create fundamental societal and economic changes.

She and her husband Newton Lockhart reside in Brevard, N.C., where she is an active leader in her church community. They are the parents of Keith Lockhart, Conductor of the Boston Pops, and Dr. Paul Lockhart, professor and author.