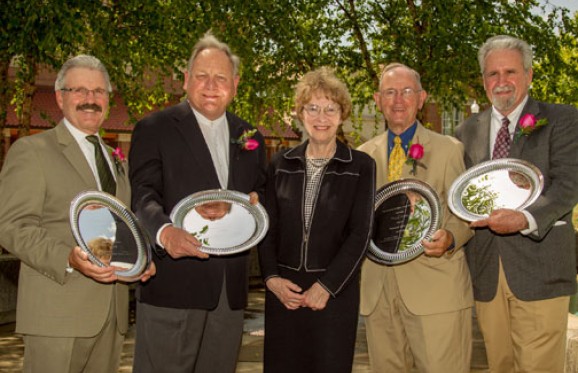 A highlight of the 2012 Alumni Weekend, held June 15 - 17 on the campus, was the presentation on June 15 of the Distinguished Service Award (DSA) to four alumni in recognition of their personal and professional achievements. The award is the university’s highest alumni honor.

Frederick Otto Bonkovsky has touched countless lives as an ethicist, professor, and author in the United States and abroad. He earned his Muskingum Bachelor of Science degrees in chemistry and biology, his Master of Divinity degree from Yale University, and Doctor of Philosophy degree in Public Policy at Harvard University.

He is currently visiting professor of medical ethics in the School of Medicine at the University of California, San Diego. He previously served on the faculties of the University of Vienna, Harvard University, Emory University, and Columbia Theological Seminary. He has twice been a Fulbright Senior International Professor and is the recipient of National Science Foundation, Danforth, Rockefeller and other competitive fellowships. The author of five books and numerous scholarly articles, he lectures frequently in the United States, Europe, and Latin America, sharing his knowledge with international leaders and policy advisors.

A leader in the Presbyterian Church USA, the Rev. Dr. Bonkovsky has pastored several congregations and served in the General Assembly. He and his wife, Elizabeth Leitch Bonkovsky, Ph.D., a member of the Muskingum Class of 1962, reside in San Diego, California. They are the parents of Joshua and Rachel, and the grandparents of two girls and three boys.

As an attorney with Bailey Cavalieri LLC, he focuses his practice on labor and employment law. He frequently shares his knowledge and expertise as a sought-after presenter at professional seminars. He has taught labor and employment law for The Ohio State University Law School and the Capital University Paralegal Institute. He has received multiple recognitions by his peers as a Best Lawyer in America, Ohio Super Lawyer, and Ohio Top Lawyer, and has twice been named the Professional of the Year in Labor and Employment Law.

Mr. Grant has served on the Muskingum Board of Trustees since 1972, and his leadership has had a profound impact on the University.  He is a member of the Board’s Executive Committee, serving currently as Secretary and previously as Vice Chair. He has helped shape Muskingum for the future and touched the lives of generations and generations of students.

Mr. Grant and his wife Martha Brouwer Grant, Class of 1962, reside in Columbus, Ohio. They are the parents of Craig Grant, Wendi S. Bootes, and Doug Grant.

Wayne F. Miller, a banking entrepreneur and community leader, had a profound impact on the economic and civic landscape of Orange County, California as the region grew to become one of the ten most populous counties in the United States.

He earned his Muskingum Bachelor of Arts degree in political science and economics, and served our nation as a Commander in the United States Navy and the Navy Reserve. He completed further study at the Graduate School of Banking at the University of Washington and established a distinguished banking career with Security Pacific National Bank, Newport National Bank, and Barclays Bank of California.

Mr. Miller founded the Orange National Bank in 1979, and served for twenty years as President and Chief Executive Officer of the independent financial institution. An active civic leader, he founded and chaired the Annual Youth Leadership Conference in the City of Orange and served the Orange Rotary in many capacities, including as President. He has been a member of the Board of Directors of the Orange Chamber of Commerce, Industrial League of Orange County, the YMCA, and Leadership Orange. For his many contributions to improving the lives of its residents, he has been honored as Citizen of the Year by the city of Orange.

He and his wife Barbara Miller are the parents of Brian, Carol, and James. Mr. Miller continues to pursue his entrepreneurial interests, founding and operating family businesses in partnership with his sons. The Millers reside in Hilton Head Island, South Carolina and Lake Forest, California.

Dr. Resler is responsible for providing economic analysis for the firm’s trading and sales operations. His outlook on the economy and financial markets is disseminated through a daily commentary, a weekly newsletter and forecast calendar, periodic reports on key trends, and a regular column for the Nikkei Financial Daily.

He earned his Muskingum Bachelor of Arts degree in economics, and Master of Arts and Doctor of Philosophy degrees in economics from The Ohio State University.  He also served our country as a member of the United States Navy Reserve. He and his wife Joan Throop Resler reside in Madison, New Jersey.  They are the parents of Christopher and Emma.