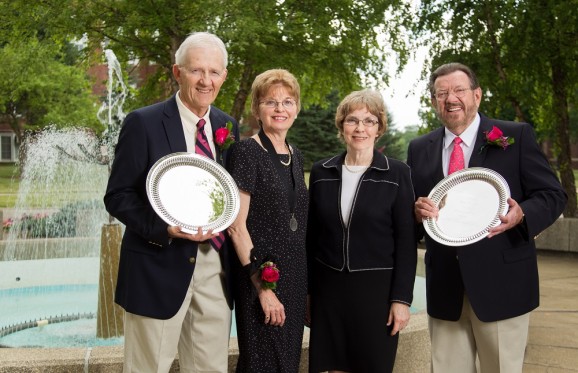 A highlight of the 2013 Alumni Weekend, held June 14 - 16 on the campus, was the presentation on June 14 of the Distinguished Service Award (DSA) to two alumni in recognition of their personal and professional achievements. The award is the university’s highest alumni honor.

Robert Owen Jones – performer, conductor, and Professor Emeritus – has enriched the lives of Muskingum students and community members through his music.

Professor Jones earned his Muskingum Bachelor of Science degree in Music Education and his Master of Science degree in Voice from the Juilliard School of Music in New York City.  He has been a featured soloist with the New York Philharmonic and Boston Symphony Orchestras, and has appeared in leading roles with numerous opera companies including those of Cincinnati, Cleveland, Dallas, Dayton, Kansas City, Toledo, and Miami.

As Professor of Music and Director of Choral Activities at his alma mater for three decades, he taught voice and music literature.  He conducted the Concert Choir, Chamber Singers, and Choral Society, and led them in overseas tours to perform in Great Britain, Switzerland and Austria   He has been a frequent faculty recitalist and touring clinician and guest conductor for numerous university, high school, and community choirs.

Professor Jones established the Muskingum Alumni Choir in 1989 and has since conducted its traditional Alumni Weekend performances.  As a Muskingum student in 1960, he led his classmates in forming the “Animals 8” men’s choral ensemble, which continues to perform music of the 1950s and 1960s, and often appears at Alumni Weekends.  His honors include Muskingum’s Cora I. Orr Faculty Service Award, the All-Ohio Youth Choir Distinguished Service Award, and the Cambridge Singers Rigel Award for Musical Contributions to the Community.

Professor Jones performs regularly as a soloist, with his wife Carol Wilcox-Jones as a duo, and with their children Christopher and Jennifer as “The Jones Family.”

Professor Emeritus Steve Kokovich changed the lives of generations and generations of Muskingum students and community members through his academic innovations and alumni outreach, as an Education Department faculty member and Special Assistant to the President.

He earned his Muskingum Bachelor of Arts degree in economics, and his Master of Education and Doctor of Philosophy degrees from Ohio University.  He was a K-12 level teacher, principal, and assistant superintendent before joining the Muskingum faculty in 1978.

Professor Kokovich established Muskingum’s first graduate degree program in 1989: the Master of Arts in Education.  His initiatives for an educational support system to allow students with dyslexia to fully participate in the Muskingum curriculum formed the basis for today’s PLUS Program, nationally-recognized as one of the best in the country in supporting students with learning disabilities.   He was the founding director of the Alumni Leadership Initiative, which since 2002 has brought distinguished alumni to campus to share their knowledge with current students, and has developed alumni-hosted student internships, mentoring partnerships, and career networks.

For more than 25 years, Professor Kokovich was Muskingum’s faculty representative to the National Collegiate Athletics Association (NCAA). He has served continuously on the New Concord Village Council for 25 years and recently completed the maximum 10 year term on the Board of Directors of the Muskingum Watershed Conservancy. He is also a member of the Board of Directors of the Evergreen Retirement Village.