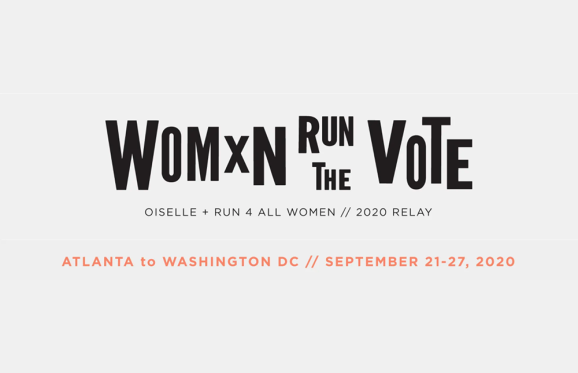 Take a talented alumna; sprinkle in a passion for history; add a dash of a competitive spirit with a desire to change the conversation, and you get a Muskie relay team competing in a 680-mile virtual race designed to educate about Civil Rights and to raise resources for voter registration.

Leeah Mahon '18 and her team of 11 “Running Muskies” are participating in “The Womxn Run the Vote” relay race which will virtually cover a journey from Atlanta, Georgia, to Washington, D.C. from Sept. 21-27. As the team logs miles, it will progress to different “locations” along the route to learn different pieces of Civil Rights history. All proceeds from the event will go to Black Voters Matter, an organization dedicated to increasing the power in marginalized, predominantly Black communities.

“The goal of Womxn Run the Vote is not only to raise money for this awesome organization, but to educate and spread awareness about the injustices that plague the Black community in this nation throughout history, and still today,” said Mahon. “As a public historian I was trained to help people understand how history has a profound effect on the present and the main reason I got involved with this event is a belief in the necessity of public history, historical literacy, and anti-racism. The fact that I get to run while engaging in this work is just a bonus.”

According to Dr. Karen Dunak, associate professor of History at Muskingum University and a member of Leeah’s team, Womxn Run the Vote is an ideal way to commemorate the 100th anniversary of the 19th Amendment, which guaranteed and protected a woman’s constitutional right to vote.

“I love this project because it extends and connects women's voting efforts to the African American freedom struggle - especially the work that went into getting the Voting Rights Act passed - and aims to enhance voting opportunities and fight ongoing voter suppression,” Dr. Dunak said. “I'm very proud of Leeah for being so committed to these efforts in both her professional and civic life, and I welcome the opportunity to participate in this important event.”

Leeah says her involvement in Womxn Run the Vote is a result of the invaluable education she received as a history major at Muskingum with guidance from mentors Dr. Dunak, Dr. Alistair Hattingh – also a member of the Running Muskies relay team, and Dr. Laura Hilton.

“These professors encouraged my passion in history and taught me the value of historical literacy and civic engagement, both of which are at the heart of this event,” said Mahon. “They are three of my greatest mentors and the best educators I have ever had.”

Womxn Run the Vote relay teams are allowed up to 20 participants for the event, meaning each person will complete a minimum of 34 miles during the race. To be as inclusive as possible, over 80 exercises can be converted into miles. If interested in joining Leeah’s team, visit https://racery.com/r/womxn-run-the-vote/ and mark Running Muskies as your team.