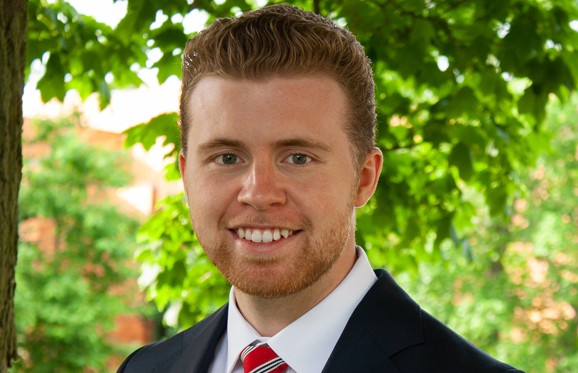 Muskingum University alumnus Blake A. Cooper ’21 has received a coveted scholarship to the highly selective Master of Accounting program at The Ohio State University’s Fisher College of Business.

Blake is the sole recipient of the prestigious Ralph E. Kent Distinguished Scholar Award, which covers the full tuition of the program. This award, granted only in years when the graduate school feels they have found a worthy candidate, was generously provided by the late Ralph Kent who was a graduate of The Ohio State University class of 1937 and served as Senior Partner and Chairman of Ernst & Young predecessor firm, Arthur Young, until his retirement in 1977.

“Muskingum afforded me the unique opportunity to develop both my professional and personal goals simultaneously. The relationships I have built with Muskingum faculty and staff led me to the tremendous opportunities which I am humbled to benefit from today,” said Blake. “In many ways, this scholarship is the ultimate expression of the reason I worked so diligently at Muskingum. When I arrived here, I was told ‘if you start here, you can go anywhere,’ and I intend to live up to the adage.”

The son of Terry Cooper and Brenda Gebhart-Cooper, Blake is a graduate of John Glenn High School ’17 where he also graduated with high honors and a 4.0 GPA. Blake attributes his love for mathematics, which began at the age of four, to his late grandmother Dorothy Roby-Gebhart and his dedication to hard work to his late grandfather Burton H. Cooper. Blake is also a distinguished Eagle Scout of Troop 158 in Zanesville, Ohio where he volunteers his time for local veterans’ causes and cemetery beautification. During his free time, he enjoys competitive road cycling, classic cars, cooking, and following the Formula One World Championship. He shares his Long Magenta Line legacy with multiple extended family members, including Dr. Benjamin Gilliotte ’79, Diana Roby-Gilliotte ’80, Jennifer Roby-McCarty ’08, Cathy Roby-King ’82, and Desiree Kay Roby-Thress ’82.

“Ask Me Anything” Features Muskingum Alumni
Back to top