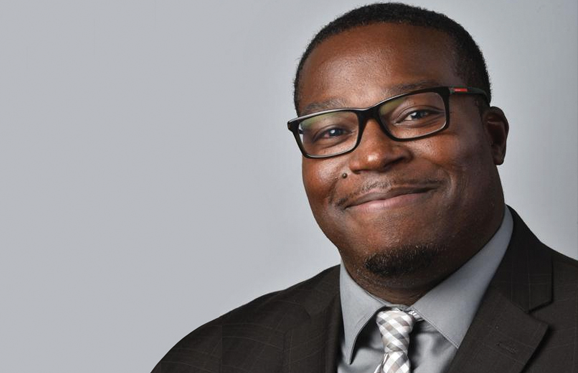 When you give through Muskingum, you can change the world!

Antasio Holley ’98 approaches his role as an educator with the question “What is the impact I can have today on my students?” He has served as a K-12 teacher and administrator for 23 years and is currently an Assistant Principal at Paint Branch High School of Montgomery County Public Schools in Maryland.

A native of Cincinnati, Antasio began his career in his hometown, serving Harmony Community Schools, one of the first charter schools in Ohio, for ten years as a teacher, dean of students, and a founder of its football program.  He then taught exceptional education for several years at his own alma mater, Withrow High School of the Cincinnati Public Schools, and went on to oversee the Project SEARCH program at the Hamilton County Sheriff’s Department for students with exceptionalities. After relocating to Tucson, Arizona, he served T’Ohono Odoham High School, Baboquibari Unified School District, and Tucson Unified School District in assistant principal and principal roles, before moving to Maryland in 2020.

“The most important aspect of my work is my ability to be a motivator and build relationships,” Antasio reflects. “All students deserve the chance to get the most out of their education and their lives, and I have had the opportunity to communicate and encourage that mindset among students from all socioeconomic groups, especially those from low-income areas.  In my administrative roles, I strive to support teachers’ efforts in developing that growth mindset approach for their students.”

While at Muskingum, Antasio was a 4-year varsity football player and a founder of the campus group CARE – Cultural Awareness and Racial Equality. “CARE began as a way for African-American students to have a voice on campus and it quickly expanded to include students from diverse backgrounds and ethnic groups who were passionate about the ideals it represented,” Antasio recalls. “We were also well supported by the faculty, staff members, and coaches.”

“Muskingum was a completely new environment for me. I was of a very small demographic group on campus at that time, being an African American student-athlete from the inner city and from a single-parent home. My early experiences were not always easy, but I developed a great love and appreciation for Muskingum. My teammates became my brothers – the locker room did not see color – and we still have strong friendships to this day.  My years at Muskingum prepared me to deliver a versatile growth mindset in the classroom, as well as help teachers and staff do the same.”

“I was able to attend Muskingum and graduate because of the scholarships and financial aid I received. That generosity had a huge impact on my life. I hope that my fellow alumni will give back to Muskingum in any way they can and be a change agent for the students who attend the University now and in the future.”

Antasio and his wife, Billita Williams-Holley, reside in Urbana, Maryland. A nurse practitioner, Billita is a United States Public Health Service Commissioned Corps Officer.  They are the parents of Antasio

Giving Through Muskingum: Matt Dansby ‘05
Back to top