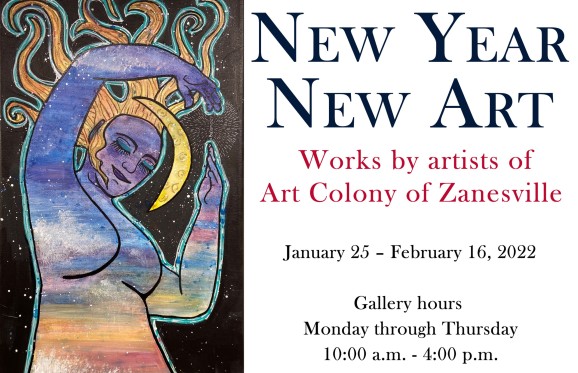 54 new artworks by Artists Colony of Zanesville members were featured.

Many of the group members lost their works, studio spaces, and supplies when a tragic fire struck the historic Zanesville Masonic Temple on January 6, 2022.   Some of the artworks originally selected for the exhibition were among those destroyed in the fire.

Yan Sun, Muskingum Professor of Art and gallery director, said “The Zanesville artists were extremely happy to have their works displayed on our campus.  They felt extremely supported by the positive responses and encouragement they received from students, faculty, staff, and New Concord area residents.”

The Masonic Temple was home to 60 small businesses in total, including studios, galleries, boutiques, creative services, and other workspaces. It was damaged beyond repair in the blaze and its remnants were demolished by the City of Zanesville.

For the Zanesville Tribune-Review’s ongoing coverage of the fire and its aftermath, visit recent articles including a display of recovered and fire-inspired art and 120 years of history lost.