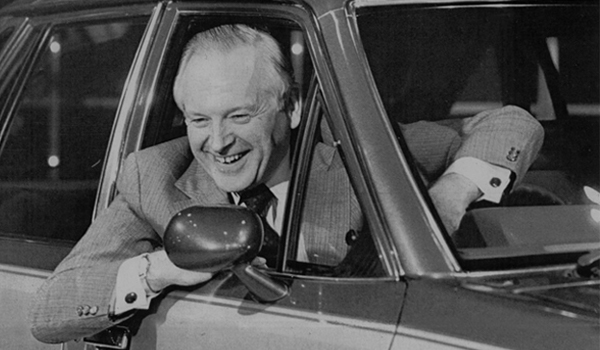 Philip Caldwell joined Ford Motor Company in 1953 and rose to become the first non-Ford family member to lead the historic corporation. Named Chairman and Chief Executive Officer in 1980, he guided Ford through an era of national economic decline, high gasoline prices, and intense competition from international automakers. By emphasizing quality, reliability, and teamwork, he orchestrated one of the most dramatic and successful turnarounds in business history.

He established Ford as the best-selling truck brand in the nation, introduced the ground-breaking Ford Taurus which would become the best-selling car in America, and created such a strong labor-relations climate that he was named an honorary member of the United Auto Workers union. He retired from Ford in 1985 and was Senior Managing Director of Lehman Brothers until 1998, serving on many corporate, non-profit, and advisory boards, including Ford, Chase Manhattan Bank, Digital Equipment Company, Macy’s, and The Kellogg Company.

He was awarded honorary doctoral degrees by Muskingum and eight other universities and was inducted into the Automotive Hall of Fame and the National Business Hall of Fame. Harvard Business School recognized his historic contribution to American business by including him in the book In Their Time: The Greatest Business Leaders of the Twentieth Century.

A graduate of the Muskingum Class of 1940, he was a member of the Muskingum's championship debate team.  He earned a Master of Business Administration degree from Harvard University in 1942 and served in the United States Navy during World War II.

In 1945, he married Betsey Clark Caldwell, who shared with her husband a wide-ranging interest in government, history, books, and music. Mrs. Caldwell participated in many historic restoration and preservation initiatives and, for many years, served as a member of the Mount Vernon Advisory Board. She also served the Detroit Symphony Orchestra as Vice Chairman of the Board of Save Orchestra Hall, one of Detroit's most successful historic preservation efforts.

Muskingum University formally dedicated Philip and Betsey Caldwell Hall on Friday, October 22, 2004 as a part of the University's Homecoming Weekend festivities. The 32,000 square-foot facility which houses programs in speech communication and theatre, including a state-of-the-art center for broadcasting, honors the extraordinary lives and generosity of two longtime champions of excellence in higher education.  Mr. Caldwell was a member of the Muskingum University Board of Trustees for 47 years.

Mr. Caldwell passed away in 2013 at the age of 93. He is survived by his wife Betsey; three children, Lawrence C. Caldwell, Lucy H. Caldwell-Stair, and Desiree C. Armitage; six grandchildren; and five great-grandchildren.