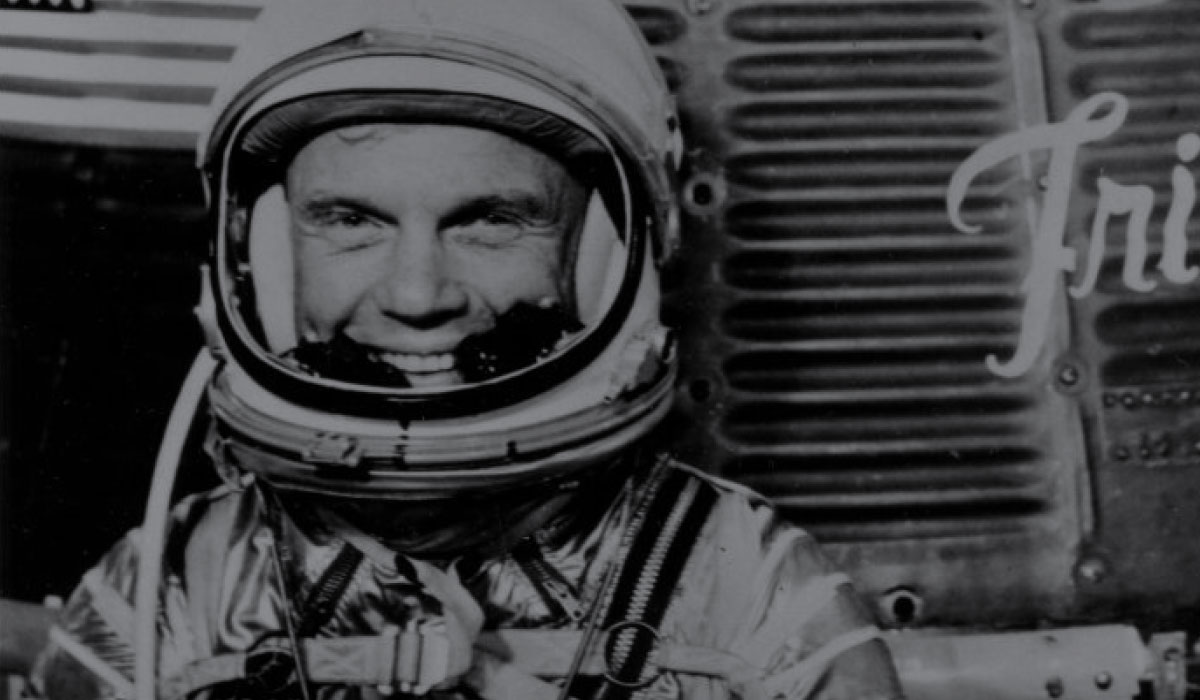 Former U.S. Senator, astronaut and U.S. presidential candidate John Herschel Glenn, Jr. '43 was born on July 18, 1921, in Cambridge, Ohio, and moved with his family to nearby New Concord shortly before he started school. Glenn eventually enrolled at Muskingum, where he received his Bachelor of Science degree in Engineering and an honorary Doctorate of Science degree in Engineering.

During his time as as a student, he learned to pilot an airplane as a member of a Naval civilian aviation training class. Shortly after Pearl Harbor, Glenn joined the aviation branch of the Marine Corps, and during World War II, he flew 59 combat missions in the Marshall Islands.

Glenn and his wife, Anna Castor Glenn ‘42, devoted much time and energy to supporting their alma mater. Both were active members of the college’s Board of Trustees, and served as Distinguished Alumni Professors. The University honored the Glenn's with Distinguished Service Awards, symbols of their outstanding service to the University.

Senator Glenn has been a featured speaker at commencement exercises and has participated in alumni weekend panels, at the college’s bicentennial celebration, the dedication of the Boyd Science Center, and numerous other events.

Muskingum was the site of a celebration on April 21, 1983, the day Senator Glenn launched his campaign for the presidency of the United States. Glenn also announced his first campaign for the U.S. Senate in Muskingum ’s John Glenn Gymnasium with hundreds of hometown friends and students in the crowd. On February 20, 1997, 35 years from the day he became the first American to orbit the earth, Glenn announced his retirement from the U.S. Senate before a packed crowd in Brown Chapel on his alma mater’s campus. Then, in 1998, Senator Glenn became the oldest human to travel in space about the Discovery 7 space shuttle flight.

The street in New Concord on which the family lived was renamed Friendship Drive after the spacecraft “Friendship 7,” in which  John Glenn, Jr., orbited the earth. In 1999, Senator and Mrs. Glenn donated the Senator’s boyhood home, which was relocated to Main Street in New Concord, where it houses a museum dedicated to telling the life story of John and Annie Glenn.